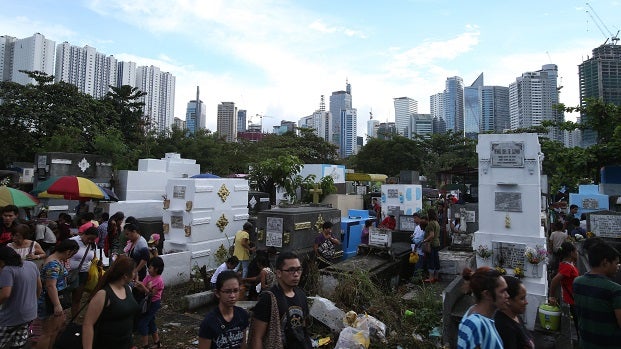 Relatives light candles and offer prayers on the tombs of their loved ones at a public cemetery in Manila South cemetery, Makati City.Thousands are visit the cemeteries to commune with their loved ones during the Catholic commemoration of All Saints Day. EDWIN BACASMAS

“At least I tried to look for them,” said a disappointed Roda Zape, 37, as she left the Manila North Cemetery on Saturday after searching for five hours and failing to locate the tombs of her parents and sister.

Those going to the Manila South Cemetery in Makati City may have a better time of it, as the government of Manila, which runs the cemetery, has computerized all its records beginning January this year.

“We have a website. The people who are still [at home] may search where the tombs of their departed loved ones are located,” said Rafael Mendez, the administrator of the Manila South Cemetery, a 25-hectare lot in Makati with a capacity of about 52,000 graves.

One only has to log in to the Internet to access the cemetery’s online tomb finder. The speed by which one can find a grave would depend on the Internet connection or if the Manila South Cemetery has the records at all.

According to Mendez, before the online grave finder, cemetery-goers usually crammed into his office looking over volumes of paper to find the names of their deceased relatives.

“But not this year, as we tried to make it easy for all of us,” he said.

One can look for a tomb by clicking www.manila.gov.ph. “Click ‘Service,’ ‘show picture in a map,’ ‘Manila South Cemetery,’ and then ‘Record Finder,’” he said, explaining how it was done.

More than 1 million dead are interred at the Manila North Cemetery, the metro’s biggest at 54 ha. Those buried there are a mix of the exalted—presidents and senators, national artists and revolutionary heroes—and the poor Manila residents whose families avail themselves of the city’s free burial services.

Hundreds head straight for the cemetery’s office seeking help in locating their loved ones’ tombs.

Someone who noticed Zape walking up and down the avenue for hours advised her to go to the Manila North Cemetery office.

But since he and his staff have just been recently appointed, only about half of the records have been encoded, Tan said.

Exhausted from going through crowded streets and narrow alleys, Zape repaired to the cemetery plaza where she offered a prayer and lighted the two candles she had bought at P10 each from the vendors lining the avenues of the capital’s biggest cemetery.

The circular plaza, dominated by a large cross and a statue of Jesus and Mary, is where All Saints’ Day and All Souls’ Day   are observed by families unable to locate their loved ones’ tombs— despite a newly launched online tomb finder—or whose leases have expired.

According to Zape, it has been 10 years since she last visited the Manila North Cemetery. The last time was when she buried her sister in 2003.

Tending to her children and poor finances prevented her from visiting her parents’ and sister’s tombs, she said. Now that she has been earning some money working in a canteen, she decided to travel to Manila.

“I’m glad I didn’t bring my children,” Zape said. “I’m not even sure if I can find the tombs.”

The Manila North Cemetery’s employees and several caretakers helped Zape through the maze of tombs to no avail. The area looked familiar, and it was reflected in the records, but she could not find the exact spot.

“Maybe it has been replaced with other tombs,” said another cemetery-goer. “Look, this is new, I remember there was a different tomb before.”

The tombs Zape was looking for were in a crowded part of the cemetery, where some lots are owned by the city government.

But Zape insisted that her family owned the lot on which her parents and sister were buried. The caretakers said it was possible a relative had sold it.

Having eaten nothing since she left Antipolo, Zape ended her five-hour search at the plaza.

“I will just offer a prayer. They will know I didn’t forget,” she said.

Computers help search for the dead