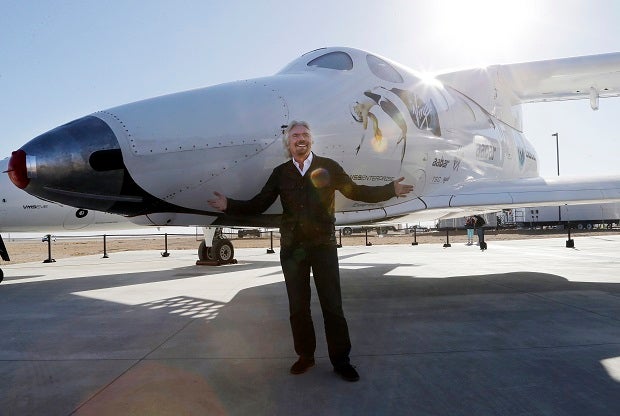 MOJAVE –British tycoon Richard Branson was poised to rally his grieving Virgin Galactic staff in California on Saturday as investigators began probing the spacecraft crash that left one pilot dead and another seriously injured.

A shocked Branson headed to the Mojave Desert within hours of Friday’s test flight crash, which saw the company’s futuristic suborbital vehicle broken into several pieces and scattered across a wide area.

The crash was the second disaster to rock the private space industry in the space of a few days after an Antares rocket carrying supplies to the International Space Station exploded after take-off in Virginia in Tuesday.

Virgin Galactic had hoped to start ferrying wealthy customers to the edge of space in 2015, charging $250,000 per person for a ticket on the company’s six-seater SpaceShipTwo.

Space travel ‘worth it’

Branson sounded a defiant note in a statement late Friday as he headed to California, insisting that the accident would not end his dream of space travel for the paying public.

“We’ve always known that the road to space is extremely difficult—and that every new transportation system has to deal with bad days early in their history,” he said.

“Space is hard—but worth it. We will persevere and move forward together,” he said.

The National Transportation Safety Board air safety agency is leading the investigation into the crash.

Early attention has focused on a new kind of fuel being used in Friday’s flight, the 35th by SpaceShipTwo. The plastic-based fuel had been tested on the ground before but not in flight.

Friday’s accident was not the first tragedy to strike the Virgin Galactic program. In 2007, three people were killed after a rocket designed for use in SpaceShipTwo exploded at the Mojave Air and Space Port.

Witnesses to Friday’s accident said there was no obvious sign of an explosion from the ground after SpaceShipTwo was released by its mothership, WhiteKnightTwo, at an altitude of 45,000 feet (13,700 meters).

“If there was a huge explosion, I didn’t see it,” said Mojave Air and Space Port chief Stu Witt. “From my eyes and my ears, I detected nothing that appeared abnormal.”

More than 500 people have already reserved seats for a minutes-long suborbital flight on SpaceShipTwo.

Virgin Galactic’s first commercial flight—in which Branson and his family have vowed to travel—has been repeatedly delayed, but before Friday’s crash was tentatively forecast for the first half of 2015.

Private companies are rushing to fill the gap left by NASA, which ended its 30-year shuttle program in July 2011 with a final Atlantis mission to the International Space Station (ISS).

Analysts said the accident is a huge blow to the nascent industry.

“You are not going to see any commercial space tourism flight next year or probably several years after that,” said Marco Caceres, an analyst and director of space studies for the Teal Group, a defense and aerospace consultancy.

NASA voiced shock at the crash.

“While not a NASA mission, the pain of this tragedy will be felt by all the men and women who have devoted their lives to exploration,” said NASA Administrator Charles Bolden.

“Space flight is incredibly difficult, and we commend the passion of all in the space community who take on risk to push the boundaries of human achievement.”