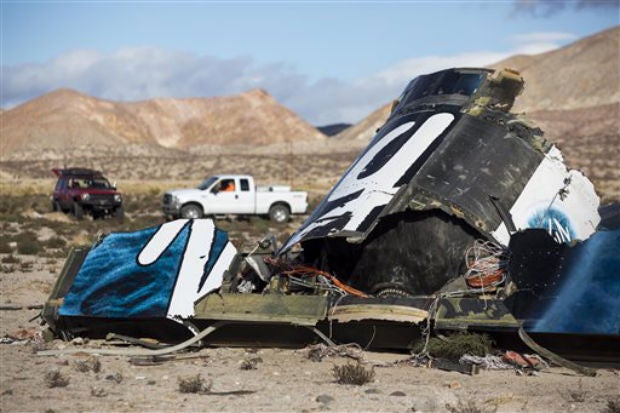 Wreckage lies near the site where a Virgin Galactic space tourism rocket, SpaceShipTwo, exploded and crashed in Mojave, Calif. Saturday, Nov 1, 2014. The explosion killed a pilot aboard and seriously injured another while scattering wreckage in Southern California’s Mojave Desert, witnesses and officials said. AP

MOJAVE, California — Investigators looking into what caused the crash of a Virgin Galactic prototype spacecraft that killed one of two test pilots said a 5-mile (8-kilometer) path of debris across the California desert indicates the aircraft broke up in flight.

“When the wreckage is dispersed like that, it indicates the likelihood of inflight breakup,” National Transportation Safety Board Acting Chairman Christopher A. Hart said late Saturday.

Learning where aircraft parts fell will help investigators determine when and how the breakup occurred, he said.

The crash almost certainly dashed founder Richard Branson’s goal of starting commercial suborbital flight next spring, but the mogul said that while he remained committed to civilian space travel “we are not going to push on blindly.”

In grim remarks at the Mojave Air and Space Port, where the craft known as SpaceShipTwo was under development, Branson gave no details of Friday’s accident and deferred to the NTSB, whose team began its first day of investigation Saturday.

“We are determined to find out what went wrong,” he said, asserting that safety has always been the top priority of the program that envisions taking wealthy tourists six at a time to the edge of space for a brief experience of weightlessness and a view of Earth below.

“Yesterday, we fell short,” he said. “We’ll now comprehensively assess the results of the crash and are determined to learn from this and move forward.”

He also criticized early speculation about crash causes. “To be honest, I find it slightly irresponsible that people who know nothing about what they’re saying can be saying things before the NTSB makes their comments.”

The pilot killed in the test flight was identified Saturday as Michael Tyner Alsbury, 39, of nearby Tehachapi. The surviving pilot is Peter Siebold, 43, who parachuted to safety and was hospitalized.

Both worked for Scaled Composites, the company developing the spaceship for Virgin Galactic. Scaled Composite said Alsbury was the co-pilot for the test flight. Siebold, who was piloting SpaceShipTwo, “is alert and talking with his family and doctors,” the company said in a statement

More than a dozen investigators in a range of specialties were forming teams to examine the crash site, collect data and interview witnesses, Hart said.

“This will be the first time we have been in the lead of a space launch (accident) that involved persons onboard,” said Hart, noting that the NTSB did participate in investigations of the Challenger and Columbia space shuttle disasters.

Hart said he did not immediately know the answers to such questions as whether the spaceship had flight recorders or the altitude of the accident, but noted that test flights are usually well-documented.

Investigators will review video from multiple cameras that were on the spaceship, the mother ship, at nearby Edwards Air Force Base and a chase aircraft, he said. They also have six “nonvolatile” sources of information from the aircraft, and radar data to sift through.

Virgin Galactic — owned by Branson’s Virgin Group and Aabar Investments PJS of Abu Dhabi — plans to fly passengers to altitudes more than 62 miles (100 kilometers) above Earth. The company sells seats on each prospective journey for $250,000.

The company says that “future astronauts,” as it calls customers, include Stephen Hawking, Justin Bieber, Ashton Kutcher and Russell Brand. The company reports receiving $90 million from about 700 prospective passengers.

On Saturday, Branson said none of that money has been spent and that anyone who wanted a refund could get it. However, he said, no one has asked, and instead someone signed up on the day of the accident in a show of support.

At 60 feet long, SpaceShipTwo featured two large windows for each of up to six passengers, one on the side and one overhead. Branson once envisioned operating flights by 2007. Last month, he talked about the first flight being next spring with his son.

Friday’s flight marked the 55th for SpaceShipTwo, which was intended to be the first of a fleet of craft. This was only the fourth flight to include a brief rocket firing. The rocket fires after the spacecraft is released from the underside of a larger carrying plane. During other flights, the craft either was not released from its mother ship or functioned as a glider after release.

The NTSB investigators examined an area about 20 miles from the Mojave airfield where debris from SpaceShipTwo fell over a wide area of uninhabited desert Friday morning. The spacecraft broke up after being released from a carrier aircraft at high altitude, according to Ken Brown, a photographer who witnessed the accident.

Friday’s accident was the second this week involving private space flight. On Tuesday, an unmanned commercial supply rocket bound for the International Space Station exploded moments after liftoff in Virginia.

SpaceShipTwo is based on aerospace design maverick Burt Rutan’s award-winning SpaceShipOne prototype, which became the first privately financed manned rocket to reach space in 2004. Three people died in a blast at the Mojave Air and Space Port in 2007 while testing a rocket motor for SpaceShipTwo.