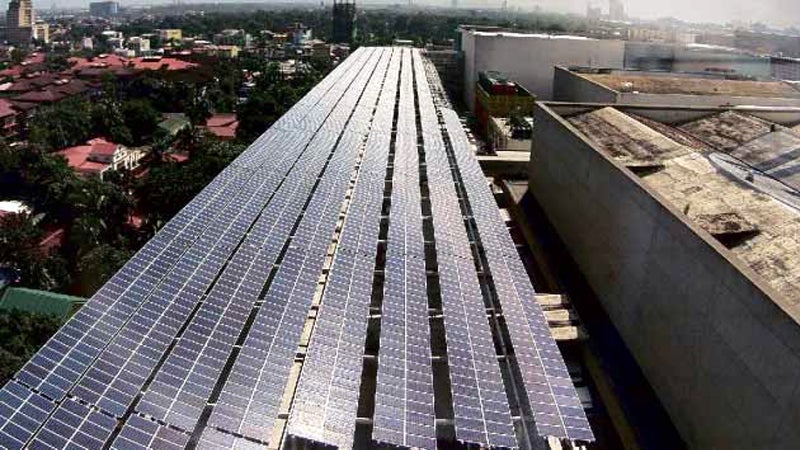 SOLAR Philippines partners with SM Malls to build the first of many solar plants around the
country as a solution to climate change and power crisis. CONTRIBUTED PHOTO

Solar Philippines added that the system was expected to operate for more than 25 years and offset an estimated 40,000 tons of carbon dioxide emission, or the equivalent of planting 200,000 trees.

Led by founder and president Leandro Leviste, Solar Philippines said it was taking the lead in accelerating the adoption of solar energy as a solution to climate change and the power crisis. The company’s mission is to make solar power affordable and accessible to every home and business in the country.

“The days of having to choose between business and the environment are over,” Leviste said. “Solar has gained the reputation of being expensive, not because of the technology, but because previous efforts were too small to benefit from economies of scale. By building the country’s largest projects, we’ve become the first local company to make solar cost-competitive with fossil fuel.”

As it expands into more high profile commercial projects, Solar Philippines is taking advantage of economies of scale to bring solar to the residential market at more affordable prices.

The company’s recently introduced residential packages are empowering Metro Manila homeowners to drastically cut their electricity bills, taking the company further along its mission of bringing solar power to every home and business in the country.

Solar Philippines is the country’s No. 1 solar provider and Southeast Asia’s biggest developer of rooftop power plants, according to Leviste. The country’s first all-in-one solar financing, design and construction company, it installs solar facilities for commercial customers at zero cost, supplying electricity at below utility rates.

With a team of 65 veterans from the solar, construction and power industries, the company is growing fast to meet the need for affordable, clean, distributed generation, Leviste added.