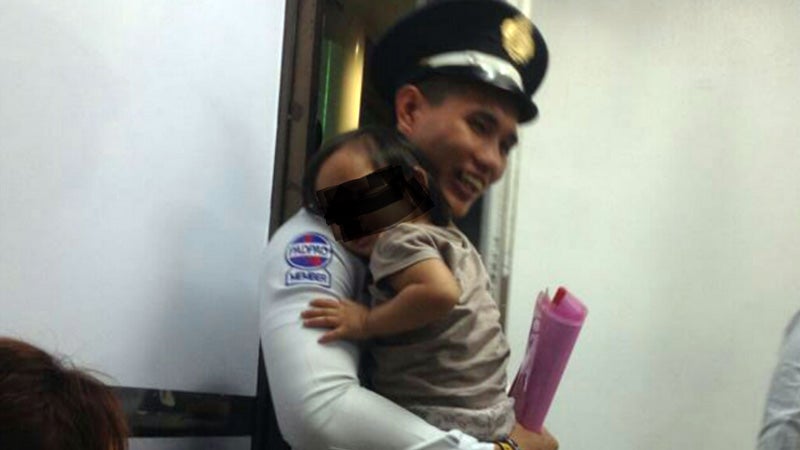 MANILA, Philippines—An abandoned child was reunited with her relatives because of a social media post, four days after the child’s 17-year-old mother apparently left her in a Quezon City mall.

A security guard found the little girl crying and holding a feeding bottle while wandering alone in the mall around 2 p.m. Sunday December 14.

The guard brought the child to the mall customer service office, expecting that her parents will come looking for her. But until 8 p.m., no one came for the child.

A mall-goer, who was supposed to report a separate incident about her stolen phone, noticed the child and asked if she was with someone. The woman learned that the child was abandoned and the mall staff had to buy milk and diaper for her.

“While waiting for the incident report for my stolen phone, I noticed a little girl walking around the room. I asked who she was, or if she was with anyone. Apparently, she was found at Blue Magic with her milk bottle all alone, crying her eyes out.

“She was brought to the customer service office at 2 p.m. and ‘til now (8 p.m.) no one has been claiming her. Everyone is starting to think she was left on purpose. The office staff had to buy diapers and milk because of how long she was there.

“It was just so sad seeing a little girl like her all alone. She didn’t even want the guard (who found her) to leave, she kept on crying and screaming if the guard was going to leave and go to his post. It was like he was her only hope for company.  Sadly, if the mall closes she’ll be turned over to DSWD, and might be off for adoption if not claimed at all.”

Some netizens shared the incident on Twitter and tagged @savethestreetkids and @DSWDserves to ask for update about the child. One netizen posted a comment on the Facebook thread that the child was taken at a DSWD (Department of Social Welfare and Development) office in Quezon City.

Before midnight Wednesday December 17, a cousin of the child’s mother contacted the woman who wrote the original post. The cousin said their relatives were not aware of what the mother did to the child until they saw the viral Facebook post.

“She told us she was taking the child to her auntie. We didn’t know that’s what she did,” the woman, who requested anonymity, quoted the relative as saying.

The relatives were able to coordinate with DSWD through the woman’s help. The grandmother will have custody of the child, the woman said.

Leni Robredo lauded for viral ‘waiting for a bus’ photo