Vhong Navarro ‘most searched’ in Google PH for 2014 MANILA, Philippines—Actor-TV host Vhong Navarro leads the 2014 top 10 list of the most searched items on Google in the country, the search engine giant recently revealed in its “Year in Search” report.

Navarro was mauled by a group of men reportedly led by businessman Cedric Lee in a condominium unit in Taguig City in January for allegedly raping model Deniece Cornejo. The incident developed into a full-blown legal drama followed religiously by netizens, as Navarro filed illegal detention raps against Lee and Cornejo.

Last September, Lee and Cornejo were released on bail after a Taguig City court did not find enough evidence to indict them with the illegal detention charge.

As a testament to the netizens’ unrelenting interest in the story, “Cedric Lee” ranked sixth in the most searched list. 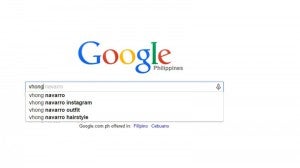 Other personalities who were included in the top 10 are the following: Hollywood actor Robin Williams who committed suicide in August, Oscar winner Jennifer Lawrence whose intimate pictures were leaked online, and newscaster Paolo Bediones whose sex videos circulated the internet.

Williams is also the most searched item on Google globally for 2014.

Other items in the top 10 are connected to pop culture and music such as the hit game “Flappy Bird,” highest-grossing animated film of all time “Frozen,” reggae-influenced song by Canadian group MAGIC! “Rude,” the embattled Malaysian flag carrier “Malaysia Airlines,” and the Taiwanese drama “Meteor Garden.”

Last year, the most searched item on Google was South African activist and President Nelson Mandela who died in December 2013.

Paul Walker one of top Google searches of 2013

TOPICS: Google, Google Philippines, infotech, technology, Vhong Navarro, Year in Search
Read Next
People are living longer—study
EDITORS' PICK
Smart releases Hyun Bin’s second TVC
EuroMillions Superdraw: A lottery draw unlike any other is coming to the Philippines
DOLE: Return of OFWs’ remains from Saudi to be ‘delayed,’ deadline moved to ‘early next week’
Water remains our saving grace right now
‘Justice will be done,’ Duterte assures as he vowed probe on Jolo incident to bare ‘truth’
Current dominant strain of COVID-19 more infectious than original—study
MOST READ
Locsin warns of ‘severest response’ if China’s army drills in SCS ‘spill over’ to PH domain
Duterte tells military: No other president looked at you the way I did
BREAKING: Duterte signs anti-terror bill into law
‘Very timely, historic’: Senators laud passage of anti-terror bill despite ‘pressures’
Don't miss out on the latest news and information.