Cancer often due to bad luck, not genes or environment 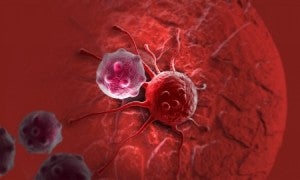 Miami, United States – Cancer is often caused by the “bad luck” of random mutations that arise when cells divide, not family history or environmental causes, US researchers said Thursday.

The study in the January 2 edition of the journal Science was led by researchers at Johns Hopkins University and based on a statistical model that includes many types of cancer in a range of human tissues.

In the adult cancers they did measure, about two-thirds could be explained by random mutation in genes that encourage tumors to grow, while the remaining one third was due to environmental factors and inherited genes.

“This study shows that you can add to your risk of getting cancers by smoking or other poor lifestyle factors,” said study author Bert Vogelstein, a professor of oncology at the Johns Hopkins University School of Medicine.

“However, many forms of cancer are due largely to the bad luck of acquiring a mutation in a cancer driver gene regardless of lifestyle and heredity factors.”

He added that people who live a long time without getting cancer, despite being long-time smokers or being exposed heavily to the Sun, do not have “good genes.”

“The truth is that most of them simply had good luck,” he added.

The team sought to look at cancer in a new light, by searching the scientific literature for information on how many times stem cells divided over the course of an average person’s lifespan.

This process of self-renewal occurs naturally in the body and helps repopulate cells that die off in a specific organ.

But the study represents the first attempt at comparing how many cancers arise from this process, compared to family history or environmental factors.

Some 22 cancer types arising in 31 tissues studied could be traced back to random mutations, the study found.

The other nine “had incidences higher than predicted by ‘bad luck’ and were presumably due to a combination of bad luck plus environmental or inherited factors,” the university said.

These nine types included lung cancer and skin cancer — which are influenced by exposure to smoke and sunshine — as well as some cancers known to be hereditary.

The findings mean that an even greater emphasis should be placed on early detection of cancer and research that could detect these harmful random acts before they lead to widespread cancer.

“Changing our lifestyle and habits will be a huge help in preventing certain cancers, but this may not be as effective for a variety of others,” said biomathematician Cristian Tomasetti, an assistant professor of oncology at the Johns Hopkins University School of Medicine and Bloomberg School of Public Health.

“We should focus more resources on finding ways to detect such cancers at early, curable stages.”

Breast and prostate cancers were not included in the study because the literature did not show reliable stem cell division rates in those areas of the body, the authors said.