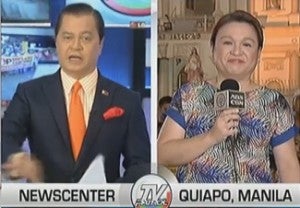 MANILA, Philippines–Netizens slammed veteran broadcaster Noli de Castro for being “rude” to seasoned reporter Winnie Cordero during her account of the city of Manila’s preparation for the annual Feast of the Black Nazarene.

De Castro was bantering with Cordero on his nightly newscast TV Patrol on Monday night when he asked her about the city’s preparation for the Black Nazarene procession.

After Cordero’s report, De Castro commented that Manila Mayor Joseph Estrada should act on the complaints of devotees against ambulant vendors, who cause obstruction and pose danger during the yearly procession.

Cordero said the city administrator already pointed out the matter during their meeting but De Castro interrupted her and insisted that it was not implemented last year even though Estrada assured him during an interview that he would act on it.

Cordero looked like she was ready to clarify the anchorman’s concern, but De Castro already cut her off to lead to the segment’s extro.

On Twitter, @dudeinterrupted said De Castro should know the difference between being “assertive and rude.”

De Castro is a well-known devotee of the Black Nazarene who has made it a point to participate in the yearly “traslacion” even when he was the country’s vice president.