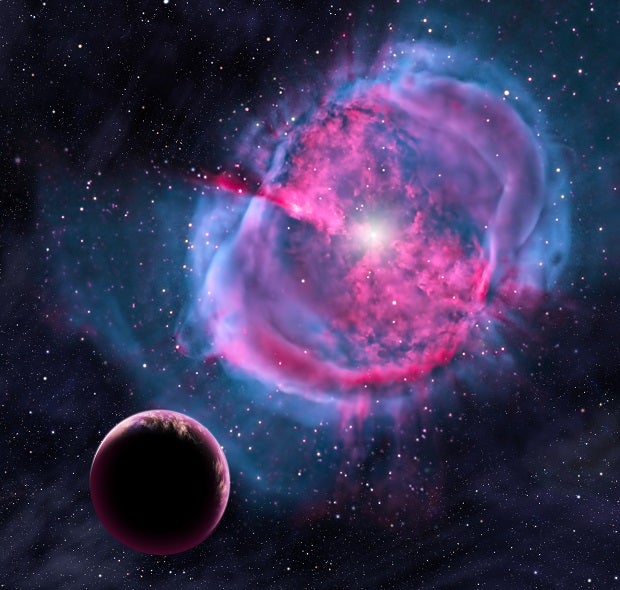 This artists conception provided by the Harvard-Smithsonian Center for Astrophysics depicts an Earth-like planet orbiting an evolved star that has formed a stunning planetary nebula. Earlier in its life, this planet may have been like one of the eight newly discovered worlds orbiting in the habitable zones of their stars. AP

WASHINGTON — Earth has a few more near-twin planets outside our solar system, tantalizing possibilities in the search for extraterrestrial life.

Astronomers announced Tuesday that depending on definitions, they have confirmed three or four more planets that are about the same size as Earth and are in the not-too-hot, not-too-cold “Goldilocks Zone” for liquid water to form.

These planets are likely to be rocky like Earth, and not gas giants or ice worlds. They get about the same heat from their star as we get from the sun, according to the latest results from NASA’s planet hunting Kepler telescope.

But don’t book your flights yet.

They may be close to Earth in size and likely temperature in the gargantuan scale of the universe, but they aren’t quite close enough for comfort.

Consider two of the new planets, the nearest to Earth discovered to date. If they have atmospheres similar to Earth’s — a big if — one would be a toasty 140 some degrees and the other would hover around zero, said study lead author Guillermo Torres, an astronomer at the Harvard-Smithsonian Center for Astrophysics.

Life conceivably could evolve and adapt to those temperatures, he said.

Oh, and they aren’t actually within commuting distance of Earth. Those two are 500 and 1,100 light years away; a light year is 5.9 trillion miles.

What’s important, said SETI Institute astronomer Douglas Caldwell, a study co-author who presented the findings at the American Astronomical Society meeting in Seattle, is that astronomers are a bit closer to finding twins of Earth and answering the age-old question: Are we alone?

“These planets do exist; we didn’t know that before,” Torres said in a phone interview from Cambridge, Massachusetts. “What we’re really looking for is signs of life eventually. We’re not there yet. It will take many years but this is the first step.”

Torres’ team confirmed earlier discoveries and added new ones, bringing the total known number of planets that are no bigger than twice Earth’s size and in the habitable temperature zone to eight or nine. But that’s only from a short search of a small part of our galaxy, so Torres believes that Earth-like planets are common throughout the cosmos, though he cannot prove it yet.

Torres likes to include one planet that would bump the new findings from three to four, but Caldwell said that planet may or may not be habitable.

It doesn’t matter much. “We do not need to talk about the one or two exoplanets that could be like Earth, we are finding so many,” said Lisa Kaltenegger, director of Cornell University’s Pale Blue Dot Institute. She wasn’t part of the study.

Torres and Caldwell highlighted the two new planets that are closest in size to Earth. The closest, called Kepler 438-b, is only 12 percent larger than Earth and gets about 40 percent more energy from its star than we do from the sun, so it would probably be warmer, Torres said. It tightly circles a small cooler red star with its year lasting only 35 Earth days and the sun in its sky would be red, not yellow.

It may hot, but “there are bacteria on Earth that live very comfortably in those temperatures, no problem,” Torres said.

The other, Kepler 442-b, is about 34 percent bigger than Earth but gets only two-thirds of the energy from its sun as we do, Torres said.

One in five Sun-like stars may have Earth-like planets