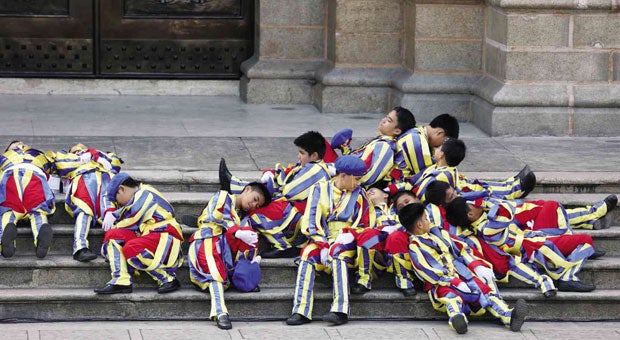 SLEEPING IT OFF The weary, little “Swiss Guards” take a break outside the Manila Cathedral while Pope Francis officiates at a Mass at the Roman Catholic basilica at Plaza de Roma in Intramuros. NIÑO JESUS ORBETA

MANILA, Philippines—The world watched as Pope Francis set foot in the Philippines—the Catholic stronghold in Asia—for a full three-day visit. Here are some glimpses of day one of his trip as it unfolded:

A traditional scene came with the inevitable 21st century touch. As Pope Francis and his procession walked up the aisle of the Manila Cathedral between a sea of white—bishops, priests and nuns in religious vestments—many of them held up smartphones and tablets to record the moment. The cathedral, whose origins date to the 16th century, sits in Intramuros, the historic “walled city” from the Spanish colonial period.

Huge crowds greeted the Pope on a warm, sunny Friday morning as his car crawled through the streets of Manila. He leaned out of the window of the blue Volkswagen hatchback to wave to cheering crowds held behind barricades on the sidewalks. His vehicle was surrounded by police vans, their lights flashing, as he headed for his first appointment of the day, a meeting with President Aquino.

Some members of a youth dance group were left crying after performing on Thursday to welcome the Pope.

Eight-year-old Gwen Bernardino said she was so disappointed that they could not see Pope Francis, because they were behind taller dancers when he passed by.

“We were so happy earlier because we thought he would come near us, but that did not happen,” she said, her voice quavering as she wiped her tears. “We kept on shouting but he was already gone. I was hoping he could kiss me, and I could hug him even just for a second.”

She was among 1,200 young people from Catholic schools and parishes who danced at the arrival ceremony.

“My message to the Pope is I love him very much even if I did not get the chance to see him in person,” she said.

“But here, we have had thousands of young people, doing also dances, but in a different way,” Lombardi told reporters with a laugh.

The mostly teenage performers wore white T-shirts at a Philippine air base and danced to pop music.

“We felt immediately that the situation, the cultural situation and the spiritual situation, is different,” Lombardi said.

He also said Colombo is a large city, but Manila is a “megalopolis” of more than 10 million people.

“We feel immediately a different situation in the sense that I think there are new aspects of this trip,” he said without elaborating.

Pope Francis’ first encounter “with these millions of people gives us an idea of what will be the importance of the presence of the Pope for the Filipino people these days.”

Two children from a shelter—10-year-old Mark Angelo Balberos and 9-year-old Lanie Ortillo—were chosen to present flowers to the Pope at his arrival ceremony at the airport. He hugged and kissed them.

“I told him bienvenido (welcome), and he said yes, bienvenido,” Lanie said. She added, “While I was hugging him I prayed that he could help more children, not only the two of us.”

On the tarmac in Manila, as the papal aircraft approached, the choreography was formidable. Flags waved in unison. Huge groups of faithful sang along to a pop song written just for Pope Francis’ visit. Everything was scripted.

Except for the hat. The Pope’s hat.

Seconds after Pope Francis appeared at the top of the Sri Lankan jet’s steps, as the crowd noise swelled, a gust of wind abruptly kicked up and blew away his papal skullcap, known as a “zuchetta” or a calotte. The pontiff grabbed at his hat—a futile effort, since it was already long airborne—then smiled and descended the steps into the Philippines, heading toward the television camera, hatless.

Amid an ocean of national planning aimed at global audiences, it was a genuine, unexpected moment.

The Philippines is one of two Catholic-majority countries in Asia (East Timor is the other) and, with 100 million people, by far the largest. Spanish colonialists introduced Christianity in the 16th century. A breakdown by religion, based on the 2010 Philippine government census: Roman Catholics, 80.5 percent; Other Christians, 11.9 percent; and Muslims, 5.6 percent. AP

‘All roads still lead to me,’ Rigondeaux tells Donaire