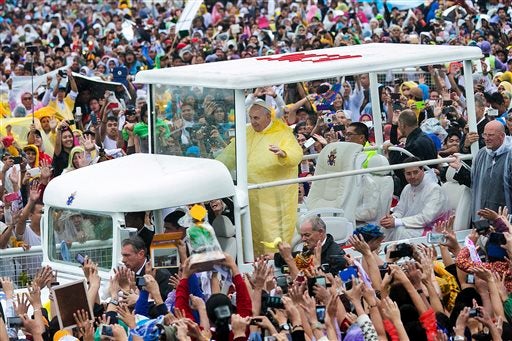 Pope Francis waves to the crowd as he arrives at Quirino Grandstand to celebrate his final Papal Mass in Manila, Philippines, Sunday, Jan. 18, 2015.  AP

MANILA, Philippines–Who can forget the booming voice that energized and kept pilgrims awake during Pope Francis’ concluding Mass at Luneta on Sunday?

Fr. Hans Magdurulang, a Filipino priest who served as emcee before and after the Mass, has found himself the target of attacks—and the object of praise—from netizens.

Interviewed by the Inquirer on Monday as netizens took to Twitter to bash or support him, Magdurulang said he was just doing his job.

Well, someone—most probably an inspired pilgrim—has created a Twitter account in honor of that unusual “barker” and aptly named it @LunetaEmcee.

Based on the critical tweets, it seemed there was no “mercy and compassion” online for the energetic emcee, who pumped up the millions that heard the Mass.

Some netizens criticized what they described as a variety-show style of hosting a solemn event.

The critics may not have thought that it was Magdurulang’s job to keep the rain-drenched crowd revved up before the Pope arrived, and lead them later in a rousing sendoff for the Pontiff.

Several times, the priest led them in chanting and waving for the Pope as upbeat music blasted from speakers.

Still, some thought his festive hosting was “too loud” and “destroyed the mood” of the Mass. The netizens apparently did not know who was behind the microphone.

Worse than a barker

“He was too loud. He was noisier than a barker,” said Twitter user Edge Jaye (@OnTheBlytheSide), likening the emcee to those whose job was to call out to commuters on jeepney and bus stops.

“(He) totally wrecked the mood of the event,” said Jeri Bernardo (@JeriBernardo).

User Don Rapas (@donrapadas) thought the emcee “turned the occasion into a pep rally” and said: “So annoying!”

Wait till the polls

Others thought a great career awaited the emcee next year—when the electoral campaign begins.

Some were peeved at the emcee’s calls on the crowd to chant louder, bring out their white handkerchiefs and do the “Francis wave.”

“The emcee forgot that it was a solemn event,” @davidescueta tweeted.

The emcee’s witty remarks elicited chuckles from the rain-drenched crowd waiting for the Pope to arrive.

Early Sunday morning, as the early risers jostled for space on the ground, the emcee read messages from people who got separated from their kin.

“You are to meet by the carabao statue. Let’s just hope that the carabao doesn’t move,” the emcee remarked.

The “Luneta Emcee” became such a hot topic on the microblogging site that it readily spawned a parody account, @LunetaEmcee, which sent out tweets in all caps, the equivalent of shouting.

Described on the account as “the voice before and after the Jan. 18, 2015, papal Mass attended by six million people,” the account had more than 713 followers as of this writing.

With a microphone for a profile picture, the user had several tweets mimicking the emcee’s chants.

Hilarity ensued as the parody account tweeted as if the caps lock button in his keyboard got stuck. The energetic posts kept the Pinoy Twitter community in stitches with tweets like these:

Amid the online bashing, others thought nothing wrong about the priest’s zealous hosting, saying he helped keep the crowd entertained amid the daylong wait under a constant drizzle.

“I was at home at the time. I thought that it was nice that he kept the people’s spirits up while waiting for @Pontifex,” said user Marilene Perez (@Mari_aOzawa).

Even those in the crowd themselves who braved the rains and stayed for long hours just to see the Pope didn’t seem bothered by the hosting, at least those the Inquirer observed as they watched through a widescreen on Roxas Boulevard.

Amid the online bashing, others thought nothing wrong about the priest’s zealous hosting, saying he helped keep the crowd entertained.

“He did well in keeping the crowd energized despite the chilly weather,” said user mssyj (@assiprofm).

Twitter user RM (@rocketman_rock), among those who watched on a Roxas Boulevard screen, wondered why there was a fuss over the emcee.

“Looking at the large LCD screen on-site, the spiritual experience is superior to the emcee on stage. Why bother?” he said.

“Luneta emcee did a job then became a victim of cyber bullying by people exhorted to practice mercy and compassion,” said Andaya, referring to the theme of Pope Francis’ visit.

A job to do

“Let’s not be quick to mock the Luneta emcee. He was just trying to get a lively reaction from the cold & weary people. And spur them on he did,” tweeted @CynthiaMoralez.

“People were tired and soaked. The emcee guy was keeping the energy up. I won’t consider that destroying the solemnity of a celebration,” observed @sofimi.

For Magdurulang, acting as emcee was a job he had to do.

“We were told to give instructions to the crowd, to cheer them on and to keep them awake for the Holy Father,” he said in a phone interview.

“That was my role for that day—to teach the audience the songs and the cheer for the Pope,” he said.

Asked if he was offended by the netizens’ comments, he said: “Not really. You cannot please everybody.”

“But those who made the comment, I wonder if they were there at the venue or they were just monitoring the event on TV,” Magdurulang said. “(Chanting) is one way of sustaining the people’s enthusiasm for and focus on the Pope.”

The priest said he took the role as emcee before and after the Mass “so the solemnity of the Mass was still observed.”

“I also asked my colleagues if there was anything foul [with what I did]…there were those who expressed gratitude saying it was helpful in giving color and life to the celebration. I thank those who appreciated us and I humbly apologize to those whom I have disappointed,” Magdurulang said.

Not the first time

Last Sunday was not the first time Magdurulang had acted as an emcee for church events. He was also one of the hosts who kept the devotees awake during the overnight vigil prior to the Mass for the Black Nazarene feast at Quirino Grandstand.

“With all humility and with all charity,” said Magdurulang, when asked if he was willing to host other church events in the future.–With reports from Paul Vincent Balois and Dan Paurom