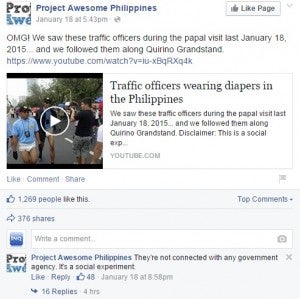 MANILA, Philippines–Seeing videos of “cops” wearing nothing but their shirt and adult diapers on social media? They’re not real policemen. And the Philippine National Police does not find the stunt funny.

A video of two “policemen” in blue uniforms and adult diapers–without pants–patrolling during Pope Francis’ concluding Mass in Luneta on Sunday made rounds on the internet.

At first, netizens were amused with the video posted on Facebook by Project Awesome Philippines, who initially claimed the men were “traffic officers during the Papal visit in Quirino Grandstand.”

But some began pointing out that the act was disrespectful to police officers who “did their excellent job keeping peace and order” while the Pope was in the country.

When it started causing stir on social media, Project Awesome’s Paul Agabin defended the stunt and said in a Facebook comment: “This is a social experiment, not real cops (badges are fake).”

As of posting of this story, Project Awesome has made the video of the “social experiment” private.

Like the majority of netizens, PNP spokesperson Chief Superintendent Wilben Mayor was not pleased about the “social experiment.”

Mayor told reporters it was “unfair and insulting” to the PNP, who had its 25,000 men deployed to protect the Pope and the public.

For National Capital Region Police Office head Director Carmelo Valmoria, the organizers of the stunt “have nothing better to do with their lives.”

(They have nothing to do with their lives so they just fooled the people.)

Valmoria pointed out that the fake police officers in the video are wearing inappropriately designed PNP shirts.

(Secondly, the uniform the PNP personnel wore during the papal visit was the General Office Attire type “C.” That is what you see as the everyday attire of the police during the Pope’s visit.

If the PNP would pursue charges against the group, they might face a violation of usurpation of authority and illegal use of uniform or insignia under the revised penal code.

But Mayor said the PNP will not focus on the people behind the prank video.

“We will instead devote our time to serve and protect the people,” he said.