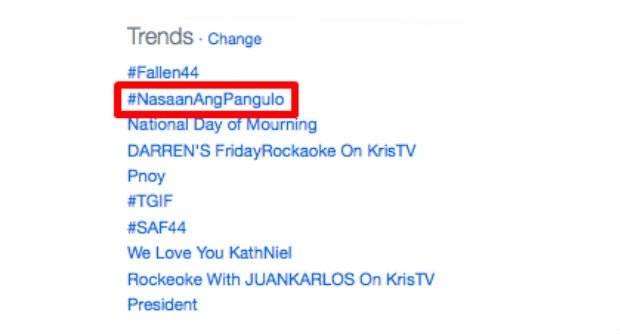 MANILA, Philippines — By Thursday afternoon, the public knew full well where President Benigno Aquino III was while the bodies of the policemen killed in Mamasapano were being given arrival honors at the Villamor Airbase.

But that did not stop netizens from asking where he is.

The hashtag “NasaanAngPangulo” trended well into the night and was mentioned in almost 80,000 tweets by 8 a.m. Friday.

#NasaanAngPangulo (or Where is the President?) captured the sentiment of Filipino netizens, questioning Aquino’s decision to attend a business event instead of commiserating with the families of 42 out of the 44 Philippine National Police (PNP) Special Action Force (SAF) members killed in a so-called “misencounter” in Mamasapano town, Maguindanao.

The parody account of Senator Miriam Santiago (@MiriamMaldita) was among those who used the hashtag.

“Attending a car show instead of being part of the families who lost their loved ones in Maguindanao. Not cool at all. #NasaanAngPangulo,” she said in one of her posts, which was retweeted a thousand times.

I salute the 44 policemen who died in Maguindanao. True heroes indeed. #NasaanAngPangulo pic.twitter.com/sKpX4BnEjI

Forensic Pathologist Rachel Fortun also joined in on the fray.

Blogger Tonyo Cruz quipped: “Our cops and troops have realized they have been serving under a leader totally undeserving of even a drop of their blood. #NasaanAngPangulo.”

Our cops and troops have realized they have been serving under a leader totally undeserving of even a drop of their blood. #NasaanAngPangulo

However, the hashtag also raised questions and spurred online debates.

Some Twitter users said it distracted the public from the victims, the 44 SAF members who were killed in the line of duty.

Singer Leah Navarro of the Black and White Movement got in an online spat with some netizens after she posted a series of tweets which included, “The point isn’t whether or not the President went to Villamor. The point is 44 fallen heroes returned home to their grieving families.”

The point isn’t whether or not the President went to Villamor. The point is 44 fallen heroes returned home to their grieving families.

Aquino’s spokespersons said he did not attend the arrival honors because it was not in his itinerary. Instead, he will lead the necrological services at Camp Bagong Diwa on Friday morning.