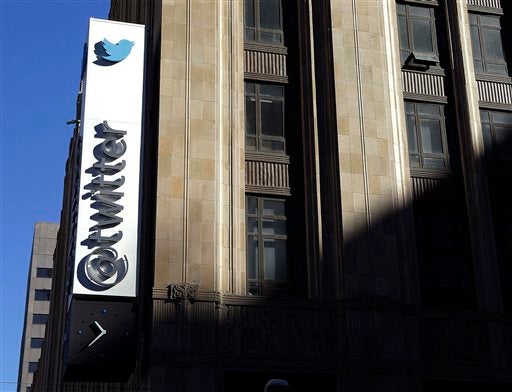 Twitter shares rallied more than 10 percent in after-market trades, evidently powered by an optimistic outlook painted by executives who expected user growth to ramp and who confirmed an alliance with Internet search titan Google.

“We closed out the year with our business advancing at a great pace,” said Twitter chief executive Dick Costolo.

Its quarterly loss shrank to $125 million, as compared with a $511 million loss a year ago.

The number of active monthly users of the San Francisco-based one-to-many messaging service monthly grew to 288 million — just four million more than in the previous quarter.

That figure fell short of expectations — analysts had predicted the figure would climb to 292 million.

Twitter said that it lost four million monthly users due to a glitch in the new iOS 8 mobile operating system rolled out for iPhones, iPads and iPod touch devices.

“There was an unforeseen bug in iOS 8,” Costolo said.

“Once we understood the issue we moved as fast as we could to minimize the impact.”

About 80 percent of the people using Twitter monthly connected with the service using mobile devices.

For the full year, Twitter reported a loss of $578 million, during which revenue more than doubled to $1.4 billion.

Twitter shares were up more than 10 percent to $45.65 in after-market trades that followed the release of the earnings figures.

Twitter is stepping up efforts to boost its user base and monetization as the messaging platform faces pressure from lackluster growth since its stock market splash debut in late 2013.

This week, Twitter unveiled plans to sell ads that run outside its own platform in what could be the start of a broader advertising network.

The plan allows advertisers to place “promoted tweets” on third party sites, the first of which are Yahoo Japan and the news app Flipboard.

Costolo said that “a relationship” with Google has been rekindled, but he was coy on the details.

The deal will make Twitter messages more visible on the Internet, according to reports by Bloomberg News and The New York Times, with tweets showing up in Google searches as soon as they are posted.

“I do want to confirm that we have a relationship that we have agreed to with Google,” Costolo said during a quarterly earnings call with analysts.

“I don’t have any more details to share with you at this time.”

Deutsche Bank analyst Ross Sandler said in a research note that the tie-up “could be the catalyst to push shares meaningfully higher,” and help Twitter add users.

When pressed, Costolo said that renewing its alliance with Google was driven, in part, by the opportunity to drive tremendous amounts of attention to Twitter given the online search giant’s scale and scope.

“This is not something that you are going to see launched or rolled out for several months,” Costolo said. “I just want to make that very clear.”

Bird ‘stands for something’

Costolo has stressed efforts Twitter made to greet new members with tailor-made, enticing streams of tweets as well as to make registered users out of the legions of people who visit the service without logging in.

“We have an obligation to better organize content and deliver it in compelling ways to our audience,” Costolo said.

Dorsey said “there isn’t a single person who has been thinking longer about Twitter” than its chief executive.

Dorsey also said Twitter is not just a company but “a movement.”

“Twitter has more global awareness than most century-old companies, and yet the brand actually stands for something,” he said.

“The Twitter bird has come to stand for empowerment and a positive force in civil society.”