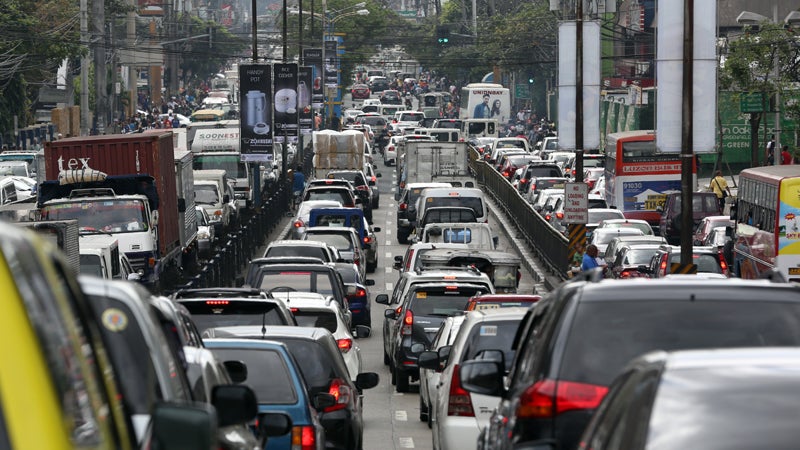 MANILA, Philippines—What should have been a joyous occasion became a day of frustration for netizens in Metro Manila who were stuck on Edsa and other congested roads as a result of the traffic rerouting for rites marking the 29th anniversary of the Edsa People Power Revolution.

Manila Archbishop Luis Antonio Cardinal Tagle was not spared from the heavy traffic caused by the Edsa anniversary festivities.

Tagle, who officiated at the Mass at the main chapel of the Shrine of Mary, Our Lady of Edsa, arrived at the venue at 12:24 p.m.

Communications Secretary Herminio Coloma Jr., who was among those who waited for the cardinal, said he received word that Tagle was stuck in traffic and that the Presidential Security Group (PSG) had been dispatched to assist him.

“Our motorcyclists met the cardinal at the gate of Wack Wack (village),” the PSG commander, Commodore Raul Ubando, told the Inquirer in a text message.

President Benigno Aquino III, Vice President Jejomar Binay and other officials who were present at the wreath-laying ceremony at the People Power Monument in the morning were already inside the chapel several minutes before the scheduled start of the Mass.

Netizens slammed the Metropolitan Manila Development Authority (MMDA) on its Facebook page and on Twitter, saying it was a “very brilliant idea” to close major roads and not declare a nonworking holiday.

“Dear Amazing MMDA. Thank you for trolling us your dear hardworking people who care about uplifting the economy of the country. Now we can’t go to work. Great thinking,” read one of the comments on the agency’s Facebook page.

On Twitter, Blair Waldorf posted, “In commemoration of 2[9] years of Edsa Traffic. I mean, Revolution.”

The heavy traffic was partly due to the closure of parts of Edsa for the wreath-laying ceremony and the Mass.

The MMDA closed the stretch of Edsa northbound from Shaw Boulevard to Santolan, forcing commuters to walk to get to their workplaces and motorists to get stuck in traffic for hours.

Aside from closing a big portion of Edsa, the MMDA also closed all perpendicular roads from the east side, like Internal Avenue, Garden Way, Julia Vargas, Bank Drive, Guadix, Poveda, Ortigas Avenue, Corinthian Subdivision Gate 2, White Plains and Santolan from midnight to 4 p.m.

Since the closure of Edsa’s northbound lane started on Shaw Boulevard, some people working on Ortigas Avenue had to walk for long distances just to get to their workplaces.

Motorists were forced to take alternate routes proposed by the MMDA but these were also congested because of the volume of vehicles.

To help ease the pain, the MMDA provided shuttle service to affected commuters.

“We deployed three 6×6 trucks and a bus to provide a ride to commuters from Shaw Boulevard going northbound and more than 2,000 individuals were accommodated by the vehicles,” said MMDA Traffic Discipline Head Cris Saruca.

That was not enough for those who were stuck on Edsa and other roads.

Accountant Mae Mangapis, 28, said the MMDA could have implemented a better rerouting plan. “I spent more than three hours sitting in traffic, just so I could reach our office in Galleria,” she said.

De Veyra posted this message on Twitter: A round of applause for whoever came up with the idea to close Edsa during a workday.

A certain @kevinawesomest likened the Edsa traffic to hell. “Tip of the day: Don’t mess with people who just had a piece of hell. And by hell I mean Edsa traffic.”

“I’m all for celebrating the Edsa People Power anniversary, but not when my workshop gets canceled due to the heavy traffic. Super BV,” said netizen Julian Mauricio.

Even politicos like Sen. JV Ejercito were not spared. He tweeted, “Traffic is still bad in Edsa/Ortigas area. Hassle.”

Even celebrity host Joyce Pring searched for her inner poet and wrote: “#EdsaKaBa cos we’re gonna be together…. FOREVER”

Akbayan chair Risa Hontiveros took advantage of her situation and sent a tweet. “Traffic heavy though moving across the Edsa Shrine. The MRT passes by slowly. May we speed up the democratization process & social justice.” With reports from Ramon H. Royandoyan, Inquirer Social Media; Maricar B. Brizuela and Jovic Yee, Inquirer Metro; Kristine Angeli Sabillo and Dan Paurom, Inquirer.net; and Nikko Dizon