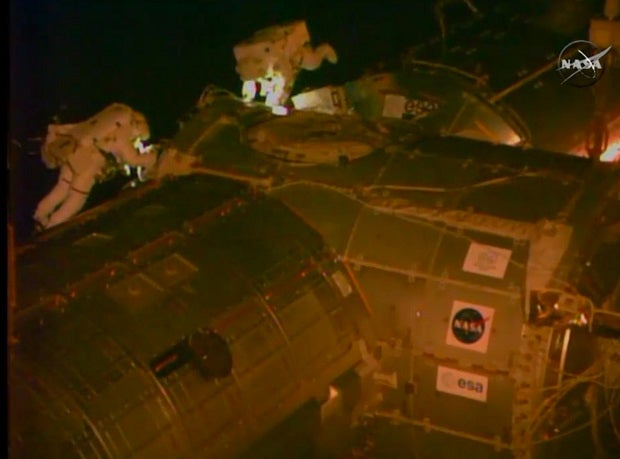 In this image from NASA television astronaut Barry “Butch” Wilmore, left, and Terry Virts during their second spacewalk outside the International Space Station Wednesday Feb. 25, 2015. Wednesday’s spacewalk is the second in five days for Butch Wilmore and Terry Virts. In all, three spacewalks are planned in just over a week to prepare the orbiting lab for future American crew capsules. AP

CAPE CANAVERAL, Florida, United States — A spacewalking astronaut ended up with water in his helmet at the end of his excursion Wednesday, scarily reminiscent of a near-drowning outside the International Space Station nearly two years ago.

This time, the amount of water was relatively small — essentially a big watery bubble floating inside Terry Virts’ helmet, near his left eye. In the summer of 2013, another spacewalking astronaut’s helmet flooded as he struggled to make his way back into the safety of the orbiting lab. He barely made it back in time.

Virts was never in any danger, Mission Control stressed, and he never reported any water during his 6 1/2 hours outside.

This was the second spacewalk in five days for Virts and Butch Wilmore, who encountered no trouble while routing cables in advance of future American crew capsules, due to arrive in a couple years.

Three spacewalks had been planned, with the next one Sunday, but its status was uncertain given Wednesday’s mishap. Managers will meet Friday, as planned, to discuss it.

Virts said the air lock was being repressurized when he first noticed the water. He said he reported it about a minute later.

The absorbent pad inside the back of Virts’ helmet was damp, but not saturated, said Italian astronaut Samantha Cristoforetti. The pad became standard procedure after the 2013 emergency.

Cristoforetti removed Virts’ helmet and wiped his face with a towel. She noted that his neck was wet and cold.

The water — cold to the touch with a chemical taste — most likely came from the suit’s cooling system, the source of the leak in 2013. Mission Control described the amount of water as “minor,” at least compared with 2013.

Virts, a 47-year-old Air Force colonel, spent about half of Wednesday’s spacewalk lubricating screws, brackets and tracks on the end of the space station’s giant robot arm. The snares had gotten a bit creaky over the past year, increasing the motor current, and engineers hoped the grease would make operations smoother.

“We’re the cable guys. Now we’re the grease monkeys — or I am,” Virts radioed.

That’s when the spacewalk ended — and Virts noticed the water.

The same suit ended up with a little water in the helmet during a Christmas Eve spacewalk in 2013, according to Mission Control.

NASA spent months investigating the 2013 emergency experienced by Italian astronaut Luca Parmitano, and zeroed in on clogged holes in a fan and pump assembly.

Another problem with the same fan and pump assembly — believed unrelated to the water issue — had to be cleared before the latest spacewalks could get underway.

NASA considers this the most complicated cable job ever at the 16-year-old orbiting outpost. So far, Virts and Wilmore have routed 364 feet of power and data cables, with another 400 feet to be strung outside the space station on the upcoming spacewalk, whenever it happens.

The extensive rewiring is needed in advance of this year’s arrival of a pair of docking ports, designed to accommodate commercial crew capsules still in development. NASA expects the first port to arrive in June and the second in December.

SpaceX and Boeing are designing new capsules that should start ferrying station astronauts from Cape Canaveral in 2017. Manned flights have been on hold at the cape since NASA’s shuttles retired in 2011. SpaceX already is launching station cargo.

NASA has contracted out space station deliveries so it can concentrate on getting astronauts farther afield in the decades ahead, namely to Mars.