#TheDress: So how the color debate began? 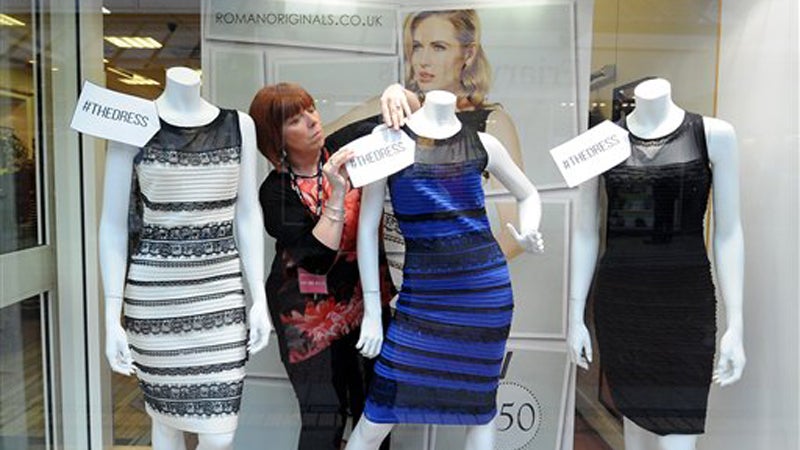 Shop manager Debbie Armstrong adjusts a two tone dress in a window display of a shop in Lichfield, England, Friday. It’s the dress that’s beating the Internet black and blue. Or should that be gold and white? AP

It’s the  dress  that’s beating the Internet black and blue. Or should that be gold and white?

Friends and co-workers worldwide are debating the true hues of a royal blue  dress  with black lace that, to many an eye, transforms in one photograph into gold and white. Experts are calling the photo a one-in-a-million shot that perfectly captures how people’s brains perceive color and process contrast in dramatically different ways.

“This photo provides the best test I’ve ever seen for how the process of color correction works in the brain,'” said Daniel Hardiman-McCartney, the clinical adviser to Britain’s College of Optometrists. “I’ve never seen a photo like before where so many people look at the same photo and see two sets of such dramatically different colors.”

The photo, taken earlier this month before a wedding on the remote Scottish island of Colonsay, also illustrates the dynamics of a perfect social-media storm. Guests at the wedding could not understand why, in one photo of the  dress  being worn by the mother of the bride, the clearly blue and black-striped garment transformed into gold and white. But only in that single photo, and only for around half of the viewers.

The debate spread from the wedding to the Internet, initially from friend to perplexed friend on Facebook.

One such wedding guest, musician and singer Caitlin McNeill, posted the photo Thursday night to her Tumblr account with the question: “Guys please help me. Is this  dress  white and gold, or blue and black? Me and my friends can’t agree and we are freaking the (expletive) out.” She’s consistently seen gold.

One of her friends, Alana MacInnes, saw gold and white for the first hour, then black and blue.

Buzzfeed sensed clickbait heaven and, amid its own newsroom argument, was among the first to call McNeill. It posted more than a half-dozen stories on the image and the tsunami of reaction.

On Twitter, #TheDress and variants surged to the top of trending lists globally within hours.

The entertainment elite then chimed in. 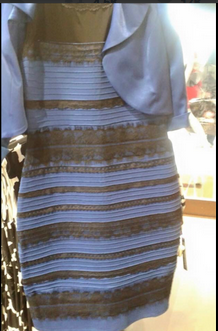 Taylor Swift saw the  dress  was “obviously” blue and black. “What’s the matter with u guys, it’s white and gold,” countered Julianne Moore. Kim Kardashian, never one to miss a trending topic, reported she was seeing gold but to husband Kanye West, it was solidly black and blue. “Who is color blind?” Kardashian asked the twitterati.

The answer, says Hardiman-McCartney, is that every viewer seeing either set of colors is right.

He says the exceptional bar-code style of the  dress, combined with the strongly yellow-toned backlighting in the one photo, provides the brain a rare chance to “choose” which of the  dress’ two primary colors should be seen in detail.

Those who subconsciously seek detail in the many horizontal black lines convert them to a golden hue, so the blue disappears into a blown-out white, he said.

Others whose brains focus on the blue part of the  dress  see the photo as the black-and-blue reality.

“There’s no correct way to perceive this photograph. It sits right on the cusp, or balance, of how we perceive the color of a subject versus the surrounding area,” he said. “And this color consistency illusion that we’re experiencing doesn’t mean there’s anything wrong with your eyes. It just shows how your brain chooses to see the image, to process this luminescence confusion.”

The photo produced a deluge of media calls Friday to the Tumblr reporter, 21-year-old McNeill, who calls the seemingly endless phone calls “more than I’ve received in the entirety of the rest of my life combined.” She says the photographer, who is also the mother of the bride, never wanted the publicity.

There’s one clear winner: English  dress  retailer Roman Originals, which has reported a million hits on its sales site in the first 18 hours following the photo’s worldwide distribution.

“I can officially say that this  dress  is royal blue with black lace trimming,” said Michele Bastock, design director at Roman Originals.

She said staff members had no idea that the  dress, when shot in that singularly peculiar light, might be perceived in a totally different color scheme. Not until Friday anyway, when they arrived at work to field hundreds of emails, calls and social media posts. They, too, split almost 50-50 on the photo’s true colors.

All agreed, however, the  dress  for the Birmingham, England-based retailer was likely to become their greatest-ever seller. The chain’s website Friday headlined its product as “#TheDress now back in stock — debate now.”

“Straightaway we went to the computers and had a look. And some members of the team saw ivory and gold. I see a royal blue all the time,” she said. “It’s an enigma … but we are grateful.”