Blue and black? Or white and gold? Color of dress divides netizens 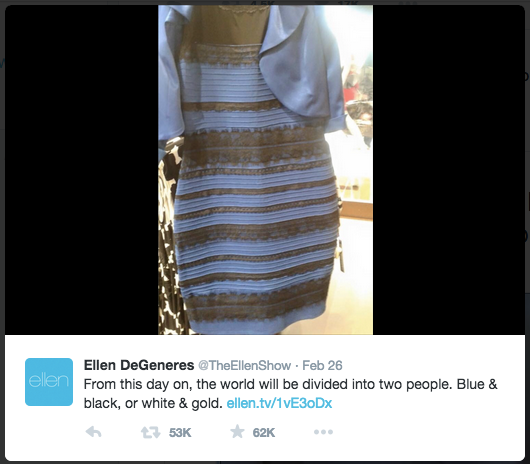 Social media is abuzz over the color of a dress.

Netizens are divided about the matter, with some seeing it as blue and black, but others white and gold.

Taylor Swift, Anna Kendrick and Kim Kardashian joined in the “battle,” with the artistes tweeting their views.

Swift tweeted, “I don’t understand the odd dress debate and I feel like it’s a trick somehow. I’m confused and scared. It’s obviously blue and black.”

“If that’s not white and gold. the universe is falling apart. Seriously what is happening?” Kendrick wrote.

Kardashian tweeted, “What color is that dress? I see white and gold. Kanye sees black and blue, who is color blind?”

The color of the dress has also been debated on various websites such as Mashable,news.com.au and Fox News.

Mashable, however, explained that the difference of color perception was due to lighting.

“It is yellow and gold in this lighting, scientifically it has to do with the lighting and reflectivity of the material,” said an ophthalmologist who was interviewed by Mashable.