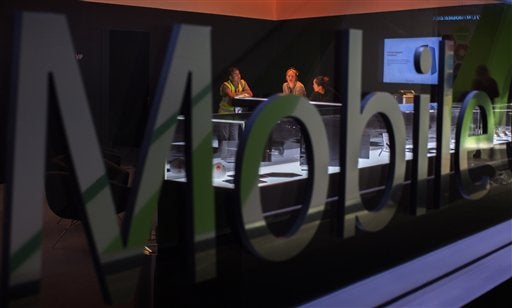 Workers are seen inside a stand at the Mobile World Congress, the world’s largest mobile phone trade show, ahead of its inauguration in Barcelona, Spain, Sunday, March 1, 2015. AP PHOTO/EMILIO MORENATTI

MADRID—Cell phone makers will seek to seduce new buyers with even smarter Internet-connected watches and other wireless gadgets as they wrestle for dominance at the world’s biggest mobile fair starting on Monday.

Along with the launches of numerous new smartphones—dominated by South Korean giant Samsung—tech firms are trying to conquer users’ bodies and connect their environments.

Several makers are set to unveil new “smartwatches,” some of which will have users chattering into their cuffs or getting on-wrist e-mail updates, at the four-day Mobile World Congress in Barcelona in northeastern Spain.

Tech executives and regulators will also seek to chart a course for a new age of wireless networks that could lead to billions of objects being connected, from cars to refrigerators.

“It’s a showpiece for smartphones in the short term, but it’ll go way beyond smartphones,” said Nigel Major, a top executive at tech group Laird.

“The most exciting trend we can see is the proliferation of connected devices everywhere we go. Ten years from now, virtually everything you’re looking at will have the potential to be connected,” Major added.

On Sunday evening, Samsung is expected to unveil its Galaxy S6 smartphone, the larger Galaxy S6 Edge “phablet,” and the latest in its series of watches.

Samsung, the world’s biggest seller of smartphones, saw its share of the world market fall in 2014 from 34 percent to 20 percent, according to research group IDC.

The Korean company faces a squeeze by Chinese phone makers on one side and on the other by US titan Apple, which released its iPhone 6 last year.

Apple, as usual, is steering clear of the show in Barcelona, but is set to launch its own smartwatch in April.

Several other Asian heavyweights also plan launches of “wearable” gadgets on the eve of the congress, such as Korean firm LG, Chinese contender Huawei and Taiwanese makers Asus and HTC.

Designers have come up with numerous gadgets that can connect to an application on your mobile, from popular “fitness tracker” wristbands to measure your heart rate to sex toys.

Now, designers hope some big product launches this year can make smartwatches a mainstream gadget and boost sales of other wearables.

This year could be a “tipping point for wearables,” research firm CCS Insight said in a report.

In Barcelona, “low-cost smartphones will feature prominently, as will wearables,” the report said. “We expect an avalanche of new products.”

Mobile telephones are a massive business—2.1 billion people, or one in three persons in the world, owned one in 2014, according to Linda Sui, an analyst at global tech consultancy Strategy Analytics.

But the battle for profits is shifting away from the handset to other connected objects, experts say.

“The wearable market is really going to expand because the smartphone market has reached a saturation point in developed markets,” said Kevin Curran, a telco specialist at University of Ulster. “So they have to be seen to be doing something else.”

On a larger scale, companies and experts in Barcelona will be mulling over what leaps forward in wireless coverage and technology are needed to create a new “5G” generation of super-fast and secure wireless connections.

“The path to 5G and the battle for early leadership will be one of the show’s hottest topics,” Wood said.

Standards have yet to be hammered out, but GSMA—the mobile consortium organizing the congress—says future 5G connections could support functions such as connected cars and traffic systems.

It “will further transform the lives of individuals, businesses and societies around the world,” said the GSMA director general, Anne Bouverot.