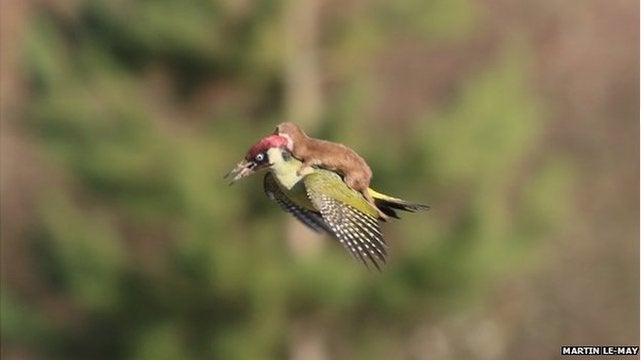 SCREENGRAB from BBC of the photo taken by Martin Le-May

MANILA, Philippines—A photograph of a weasel riding on the back of a green woodpecker has taken flight on social media.

The image was taken by amateur photographer Martin Le-May at Hornchurch Country Park in east London on Monday, according to a BBC report.

Le-May told BBC in an interview that he was out walking with his wife Ann when he heard a “distressed squawking noise.”

He said he looked toward the noise and later saw a “woodpecker with some kind of small mammal on its back.”

The photo has gained much attention on Twitter and has been shared by thousands of netizens.

“I’m so proud so many people are getting to see my image. I’m totally taken aback by the response to it,” Le-May said. NC