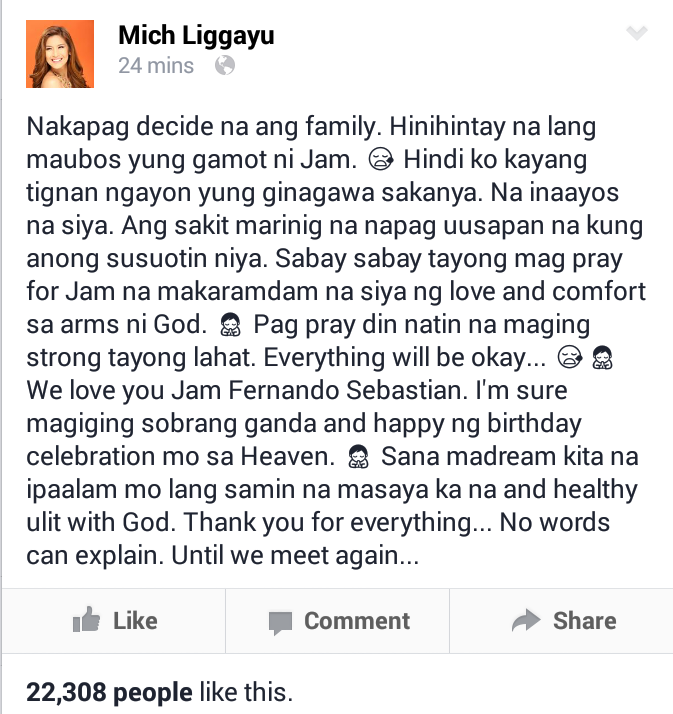 At one point, the hashtag “RIPJam” even topped the list of the most-tweeted topics. As of 5:30 p.m., the hashtag remained on third spot.

Sebastian’s death from lung cancer—which he had battled for the past year—triggered an outpouring of grief on social media, where fans, show biz folks and other online personalities offered prayers, and extended condolences.

Zsa Zsa Padilla gave Michelle Liggayu—Sebastian’s fiancée and the other half of Jamich—a message of encouragement. “Stay strong. You’re in my prayers,” she tweeted.

Sebastian and Liggayu had established a considerable online presence and amassed a huge fan base of mostly young adults, thanks to their viral video blogs and short romantic films, which they produced, directed and starred in themselves.

Their official YouTube channel called, Jamich TV, has close to 570,000 subscribers. Before Sebastian’s death, Jamich had uploaded 30 videos that have so far notched over a million views—the most popular of which is “Text: Story of Best Friends,” which has about 8.7 million.

That short film, coincidentally, featured the two YouTube celebrities acting out a love story in which Sebastian dies in a hospital bed.

The news was confirmed by Sebastian’s mother, Maricar, on Facebook, where she had been sharing photos and updates about the condition of her son, whose health drastically deteriorated in the past few weeks. “The fight is over … We lost the battle,” she said.

Still, Maricar said she was proud of her son for never losing faith. “He fought until the end. He would give me two thumbs up from time to time, as if to say that he wants to continue on,” she told the Inquirer in a phone interview. “We almost lost him a week ago, but he gave us more time.”

Although grieving for her loss, Maricar said that she also felt a sense of relief knowing that her son was at peace and unburdened by pain. She described Sebastian as a “down-to-earth and kind person.”

She added that she was overwhelmed by the amount of love Sebastian had been getting, even from total strangers. “I never knew that he had so many supporters and that he had touched the lives of many people,” Maricar said. “I’m very proud of him.”

Liggayu related on Facebook that her boyfriend of almost seven years was taken off life support after being on it since Thursday last week.

Till we meet again

“Let’s all pray that Jam finds love and comfort in the arms of God … Everything will be OK. We all love you … I’m sure you’ll have a great birthday celebration up there in Heaven,” she said in a message written in Filipino. “Thank you for everything … No words can explain; till we meet again.”

The Inquirer sought Liggayu’s comment through her handler but was not able to get any response as of press time.

The couple, which began putting out short films in 2011, had starred in music videos of such local acts as 6cyclemind and Davey Langit. Their popularity also piqued the interest of Viva Artists Agency, which signed them.

Soon they were booking guestings on TV shows, such as “Gandang Gabi Vice” and “Kris TV,” whose respective hosts, Vice Ganda and Kris Aquino, visited Sebastian at St. Luke’s Medical Center in Taguig, where he was confined.

While Manny Pacquiao, one of Sebastian’s idols, wasn’t able to personally see the YouTube star, the boxing champion recorded a video message instead. “Be strong and courageous,” he said.

Sebastian, who proposed marriage to Liggayu in May last year, related in past TV interviews that, when he was feeling pain, he would think of his fiancée walking down the aisle. “I envision me being with her, with our future kids,” he said. “I vow to make it up to her.”

Liggayu said Sebastian’s bout with lung cancer had made their relationship even stronger. “I take care of him and encourage him as much as I could,” she said. “My love for him grows every day.”