Solar plane leaves India for next stop in Myanmar 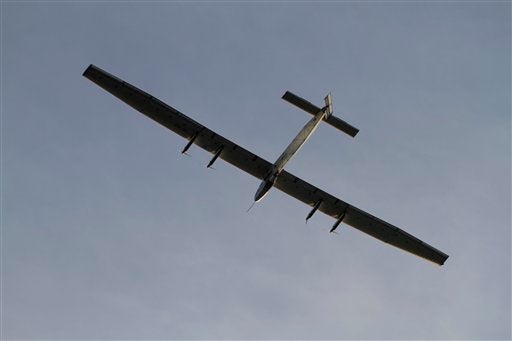 Swiss-made Solar Impulse-2 takes off from Ahmadabad, India, Wednesday, March 18, 2015. The solar powered aircraft is Wednesday headed to the northern Indian city of Varanasi on the third leg of its’ historic round-the-world trip. AP

NEW DELHI — A solar-powered airplane on a round-the-world journey took off Thursday from the northern Indian town of Varanasi and was headed for its next stop in Myanmar.

Swiss pilots Bertrand Piccard and Andre Borschberg are taking turns flying the aircraft as they attempt to circumnavigate the globe on the journey that was expected to take five months. 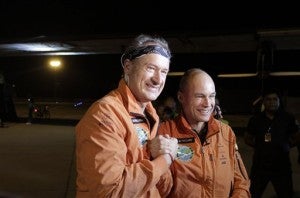 The fuel-free aircraft, called the Solar Impulse 2, is powered by more than 17,000 solar cells on its wings that recharge the plane’s batteries, enabling it to fly during the day or night. The single-seat Swiss-made plane was expected to land in Mandalay in Myanmar later Thursday.

The flight has attracted attention around the world from people who see solar power as the fuel of the future, providing a source of clean, renewable energy.

The plane’s journey began last week in Abu Dhabi, when Borschberg flew the first leg of the trip to Muscat, Oman.

For the second leg, Piccard was at the controls of the aircraft. The 1,465-kilometer (910-mile) flight from Muscat to Ahmadabad in western India took nearly 16 hours, and took the plane over the Arabian Sea in its first sea crossing.

The Solar Impulse 2 is slated to make 12 stops during its 35,000-kilometer (21,700-mile) trip, including two stops in China, before it crosses over the Pacific Ocean. It will then land in Hawaii and the U.S. Midwest and the East Coast before flying over the Atlantic Ocean.

Some legs of the trip, such as over the Pacific and Atlantic oceans, means five days and five nights of flying solo.

Solar-powered plane takes off from Oman, heads to India