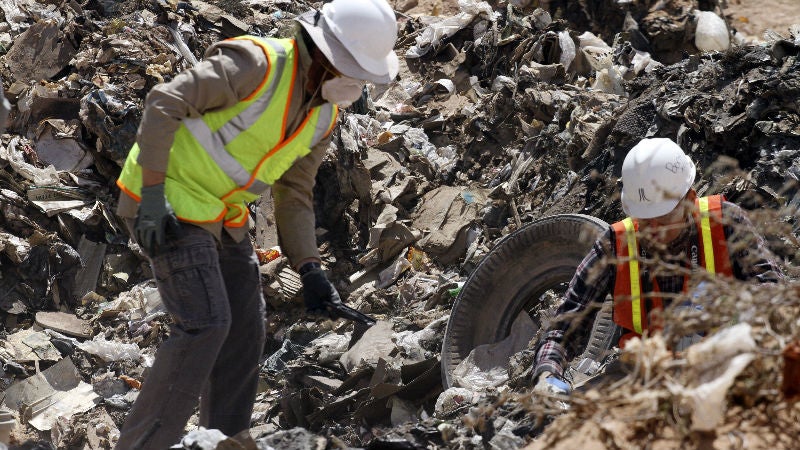 In this April 26, 2014 file photo, workers sift through trash in search for decades-old Atari ‘E.T. the Extra-Terrestrial’ game cartridges in Alamogordo, N.M. A documentary on Atari’s decline and a decades-old urban legend on the secret dumping of the “E.T.” game in the New Mexico desert is airing on Netflix. “Atari: Game Over” was released on the streaming service late Wednesday, April 1, 2015, and details the demise of gaming giant Atari. (AP Photo/Juan Carlos Llorca, File)

ALBUQUERQUE, New Mexico— A documentary explores the decline of videogame giant Atari and the secret dumping of its flopped “E.T.” game in a New Mexico landfill.

“Atari: Game Over” began airing on Xbox last year and was released on Netflix on Wednesday. It also will air on Showtime on April 16.

The documentary investigates claims Atari hid its biggest failure — 1982’s “E.T. The Extra-Terrestrial” — by burying the cartridges in an Alamogordo dump. The game had a reputation of being the worst ever made and contributed to the company’s demise.

But the film also is about Atari’s rise and the pioneering mark it made on the gaming industry, said Gerhard Runken, VP of property development at digital agency Fuel Entertainment, which obtained the rights to excavate the landfill.

“It’s part of American history,” Runken said. “It shows how we evolved. This is not just about gaming.”

Two years ago, Fuel approached Xbox Entertainment Studios about shooting a documentary of the excavation. Word of the project spread and generated interest around the world, with people watching to see to see if any games would be discovered.

Between 300 and 400 games were uncovered from the landfill last year and were auctioned on eBay. The city of Alamogordo, which owned the games, earned thousands of dollars from the sale.

One of the “E.T.” game cartridges unearthed from a heap of garbage was added to the Smithsonian’s videogame history collection. A museum in Rome even opened an exhibit on the dig that includes dirt from the landfill.

While the documentary dives into the search and excitement of finding forgotten Atari games, it also tells the story of “E.T.” game developer Howard Scott Warshaw.

“It’s actually an emotional story,” Fuel Entertainment spokesman Nick Iannitti said. “It talks about how he was scapegoated for everything.”