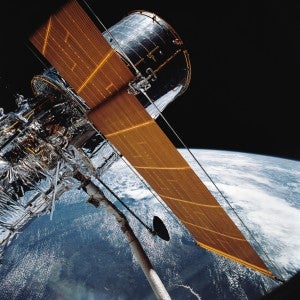 In this April 25, 1990 photograph provided by NASA, most of the giant Hubble Space Telescope can be seen as it is suspended in space by Discovery’s Remote Manipulator System (RMS) following the deployment of part of its solar panels and antennae. This was among the first photos NASA released on April 30 from the five-day STS-31 mission. The Hubble Space Telescope, one of NASA’S crowning glories, marks its 25th anniversary on Friday, April 24, 2015. With more than 1 million observations, including those of the farthest and oldest galaxies ever beholden by humanity, no man-made satellite has touched as many minds or hearts as Hubble. AP

With 1 million-plus observations, including those of some of the farthest and oldest galaxies ever beheld by humanity, no man-made satellite has touched as many minds or hearts as Hubble.

NASA is celebrating Friday’s anniversary with ceremonies this week at the Smithsonian Institution and Newseum in Washington.

READ: Hubble, the telescope that revolutionized our view of space

A look at Hubble’s quarter-century in orbit about 350 miles above Earth:

A full decade in the making, Hubble rocketed into orbit on April 24, 1990, aboard space shuttle Discovery. 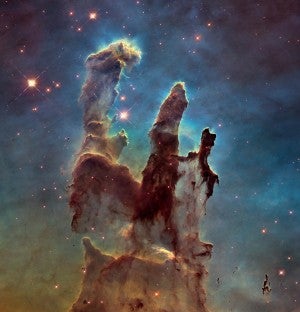 This image made by the NASA/ESA Hubble Space Telescope shows the Eagle Nebula’s “Pillars of Creation.” AP

NASA wanted an observatory free of the atmosphere’s distortion and, in some cases, absorption of light. Stars, for example, do not appear to twinkle when seen from space. The telescope was named for American astronomer Edwin Hubble, who in the 1920s determined that the universe is expanding.

Sky-high excitement turned into bottomless agony when it quickly became apparent that the telescope’s primary mirror had been botched during manufacturing, resulting in blurry eyesight. Three years later, with NASA’s reputation and entire future on the line, a team of astronauts managed to restore Hubble’s promised vision with replacement parts.

Shuttle astronauts visited Hubble five times, from 1993 to 2009, to make improvements and repairs to the 43-foot (13-meter)-long observatory, about the size of a school bus. That last mission almost didn’t happen: NASA canceled it for safety reasons in the wake of the 2003 shuttle Columbia disaster. But public uproar and changing NASA administration, along with detailed crew-rescue plans just in case, led to the flight’s reinstatement. By the time Atlantis blasted off on the last servicing mission, NASA put the investment in Hubble at $10 billion.

Three-time Hubble mechanic Grunsfeld was the last person to lay hands on the orbiting observatory. He recalls giving Hubble “a little pat and a salute,” and telling it, “Good travels, Hubble.” 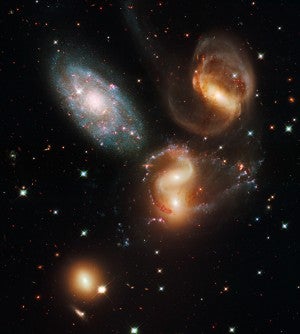 This image made by the NASA/ESA Hubble Space Telescope shows a group of five galaxies known as Stephan’s Quintet. AP

Hubble has traveled 3.4 billion miles (5.5 billion kilometers), circling Earth nearly 137,000 times and making more than 1.2 million observations of more than 38,000 celestial objects, according to the Space Telescope Science Institute in Baltimore. The most distant objects spotted by Hubble — primitive galaxies — are some 13 billion light-years away and date to within 400 million or so years of the universe’s origin, known as the Big Bang.

Hubble provides an average of 829 gigabytes of archival data every month, according to the institute. Altogether, Hubble has produced more than 100 terabytes of data.

Early on, Hubble proved the existence of super-massive black holes — and found they’re located at the center of most galaxies. It also helped to pinpoint the age of the universe at 13.8 billion years old, by determining the current rate of expansion of the universe with an uncertainty of just 3 percent, according to the Mario Livio, an astrophysicist at the space telescope institute.

Thanks to Hubble, he noted this week, astronomers now know that cosmic expansion is accelerating because of mysterious dark energy.

The space telescope has shown that the birth rate of stars hit a peak in the universe about 10 billion years ago and has been declining ever since, Livio said.

Astronomers have published 12,800 scientific papers based on data from Hubble. Some of the research on supernovas, or exploding stars, contributed to a Nobel Prize in physics in 2011. 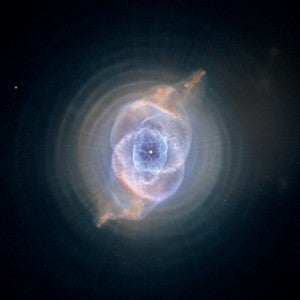 This image made by the NASA/ESA Hubble Space Telescope shows NGC 6543, the Cat’s Eye Nebula. AP

NASA’s Grunsfeld said “there’s pretty high probability” that Hubble will keep working until at least 2020. Gravity is slowly lowering the telescope’s approximately 350-mile (560-million kilometer)-high orbit, but the good news is that low solar activity is keeping the atmosphere thinner, which in turn should keep Hubble up until the 2030s.

On the last Hubble mission in 2009, Grunsfeld installed a docking adaptor on the bottom of the telescope. The plan was — and still is — to one day launch an unmanned rocket to Hubble so a motor can be installed to guide the telescope toward a Pacific re-entry.

The 8-foot (2.4-million meter) primary mirror is the main concern: It’s expected to survive the atmospheric plunge. That’s why NASA does not want Hubble coming down, uncontrolled, over populated areas.

NASA’s James Webb Space Telescope is due to be launched in 2018 to a vantage point 1 million miles (1.6 million kilometers) away.

The Webb will specialize in the infrared wavelength, allowing it to peer into some of the faintest, most distant recesses of the universe. This should enable the telescope — named after the late NASA administrator who guided the Mercury and Gemini programs, and set the stage for the Apollo moon landings — to look back even farther in time than Hubble and detect galaxies formed a mere 200 million years following the Big Bang.

By 2019, Webb should be up and running with the Hubble still in action and powerful, new ground telescopes pointing skyward.

“It will just be absolutely the most capability we will have ever had to look at the cosmos and try and understand it,” Grunsfeld said. “I’m convinced there are going to be some big discoveries.”