Malaria vaccine is a letdown but could still reduce cases 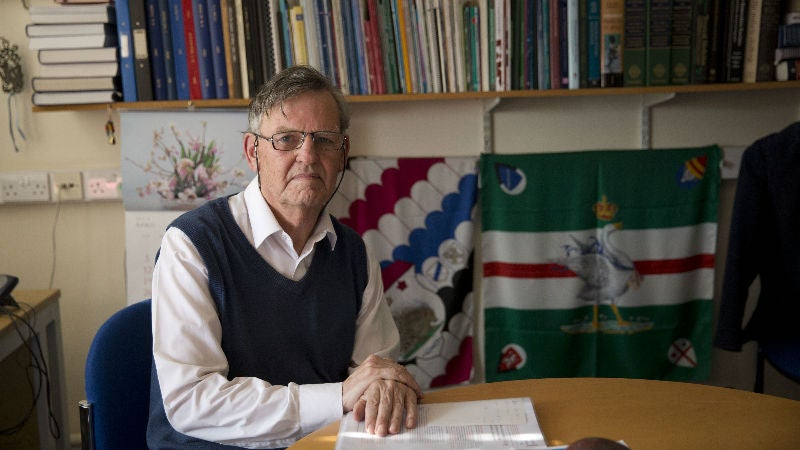 In this April 21, 2015 photo, Professor of Clinical Tropical Medicine Brian Greenwood of the London School of Hygiene and Tropical Medicine poses for a portrait in his office there in London. The world’s leading malaria vaccine candidate appears to be a disappointment, with final study results showing it doesn’t work very well and that initial protection fades over time. GlaxoSmithKline has invested hundreds of millions of dollars into the RTS, S candidate, which it first developed in 1987. The shot is likely to be the world’s first licensed vaccine against a parasite; a decision from the European Medicines Agency is expected later this year. (AP Photo/Matt Dunham)

LONDON— The world’s leading malaria vaccine candidate appears to be a disappointment, with final study results showing it doesn’t work very well and that initial protection fades over time.

Despite the dismal results — it protects about one-third of children vaccinated — developers are moving ahead to get it approved because it could still help protect some children from getting the mosquito-spread disease.

GlaxoSmithKline has spent hundreds of millions of dollars on the vaccine, which is likely to be the world’s first licensed shot for malaria. A decision from the European Medicines Agency is expected later this year.

The World Health Organization had previously set a target of 2015 for having a malaria vaccine that was at least 50 percent effective with protection lasting longer than a year. According to a study published Friday in the journal The Lancet, those goals have been missed with the GlaxoSmithKline vaccine, though scientists say the shot isn’t a complete waste.

“Everyone accepts that this is not the perfect or the last malaria vaccine,” said Brian Greenwood of the London School of Hygiene and Tropical Medicine, the study’s lead author. “It’s not good enough to stop transmission but it will cut the huge burden of disease.”

He noted there are about 200 million cases of malaria every year, with many children infected multiple times.

“Preventing some of those attacks is not insignificant,” he said. The vaccine study involved about 15,500 babies and toddlers in Africa; one group got three doses; a second group also got a booster shot and a third group got dummy shots. All of the children used a mosquito bed net and they were followed for up to four years.

Overall, the vaccine was about 30 percent effective in those who got three doses and a booster shot but the protection waned over time.

It worked a little better — about 36 percent — in those 5 months to 17 months. But it was only 26 percent effective in babies and vaccination made no difference in the rates of severe malaria or deaths.

More commonly used vaccines, like those for measles and polio, work more than 90 percent of the time.

Researchers reported side effects including pain, fever and convulsions. There were also 22 cases of meningitis in babies and toddlers who were immunized compared to one case in the group that didn’t, but the researchers couldn’t explain why.

Greenwood said the vaccine would likely be made available at cost and that major funders have already expressed interest in paying for immunization campaigns. Other experimental malaria vaccines are being developed but are at least several years behind.

WHO estimates malaria killed more than 580,000 people in 2013, mostly children in Africa under age 5. Officials mostly try to slow the mosquito-spread disease using bed nets, insecticide spraying, and giving out malaria medications to entire villages in areas with high levels of the disease.

“This vaccine could mean children will have only two bouts of malaria a year instead of five,” said Dr. Martin De Smet, a malaria expert at Doctors Without Borders, who was not connected to the study.

He said convincing parents to get their children vaccinated several times might be a tough sell. “They know their child will probably get some malaria despite the vaccination, so how enthusiastic are they going to be?”

Adrian Hill of Oxford University, who is working on a rival malaria vaccine, said it was worrying that children who got three doses in the study but no booster, appeared to be more vulnerable to malaria afterward.

“The vaccine stops them from building up natural immunity to malaria, so then when the protection wears off, they may be more susceptible,” he said.

He agreed the vaccine would likely be useful in certain situations and said some other scientists, including his own team, are adding other components to the GlaxoSmithKline vaccine, known as RTS,S, to improve its potency.

WHO said it expects to make a recommendation about the vaccine in October if the European Medicines Agency has issued its assessment by then.

“Any financing for this vaccine must not draw resources away from scaling up bed nets, effective drugs and rapid diagnostic tests for malaria,” said WHO’s Dr. Vasee Moorthy in an email.

In another study published Friday in the journal The Lancet Infectious Diseases, researchers estimated that there might have been an extra 10,900 malaria deaths last year after the Ebola outbreak in West Africa crippled health systems there, with another 3,900 deaths because of transport problems that meant bed nets weren’t delivered.