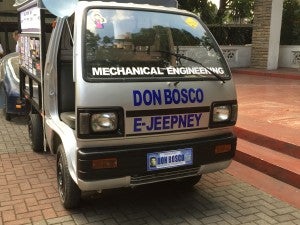 “Servant One” is said to be the first e-jeepney completely assembled by students. Photo by Aries Joseph Hegina/INQUIRER.net

WHAT?! Building an electric vehicle from “junk”?

That was exactly what five college students from Don Bosco Technical College in Mandaluyong City did in making an electric jeepney, which they hope to see plying the country’s roads soon.

The group claims that Servant One is the first e-jeepney in the country assembled by students with the guidance of their advisers.

Making the e-vehicle ‘with soul’

During the launching of the e-jeep before sponsors, school administrators and faculty members on Tuesday, team leader Astoriano narrated how his group came up with the electric vehicle. 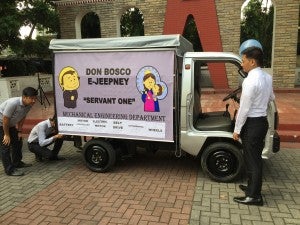 He said that the idea to assemble the Servant One came when they entered the Shell Eco-Marathon, an annual competition which featured smarter mobility and energy efficiency in vehicles.

Astoriano said that the body of the electric vehicle was made of discarded multicab that they bought from a junk shop for P15,000 and retrofitted with parts they imported from abroad.

The money for the components of the e-jeep was pooled from the donations of the school alumni, private benefactors and city officials.

The 8-seater e-jeep is powered by lithium ion battery.

The school’s rector, Fr. Vitaliano Dimaranan, SDB, hailed the students’ feat, hoping that Servant One will be ready for nationwide distribution.

“Despite so many limitations we have (gone through), you pulled this through. And you came out with something that is really worth sharing for the rest of the country,” Dimaranan said.

The school rector took the Servant One for a ride as he drove around the school quadrangle.

On the other hand, engineer Paul Catalan, one of the group’s advisers, praised the students for making technology “with a soul.”

“We have faced oil dependence, air pollution. For many years, our institution’s battle cry has ‘technology with a soul’…We believe that electrifying our transport system will be potentially good. Today, we have shown that an electric vehicle can be built by students and that it is more efficient and cleaner than conventional vehicles,” he said.

Astoriano shared his group’s plans for the future of the electric jeepney, which is seen as the future of land transportation in the country.

He said that he wants the Servant One to utilize solar energy and to become sustainable.

“We are hoping that the future students who will handle the e-jeepney to conduct future studies so that the Servant One can become self-sustaining, such as putting solar panels on the vehicle’s roof. We also want them to plan the charging stations for the e-jeepney,” he said.

Non-governmental organization Institute of Climate and Sustainable Cities (ICSC) introduced the first e-Jeepney in the Philippines in 2007. For its first run, 20 e-jeepneys assembled in the country plied routes inside Salcedo and Legaspi villages.

In 2014, 20 electric vehicles named “Comet” or the City-Optimized Managed Electric Transport were rolled out to take passengers on a 22-kilometer route from SM North Edsa to LRT-Katipunan station.