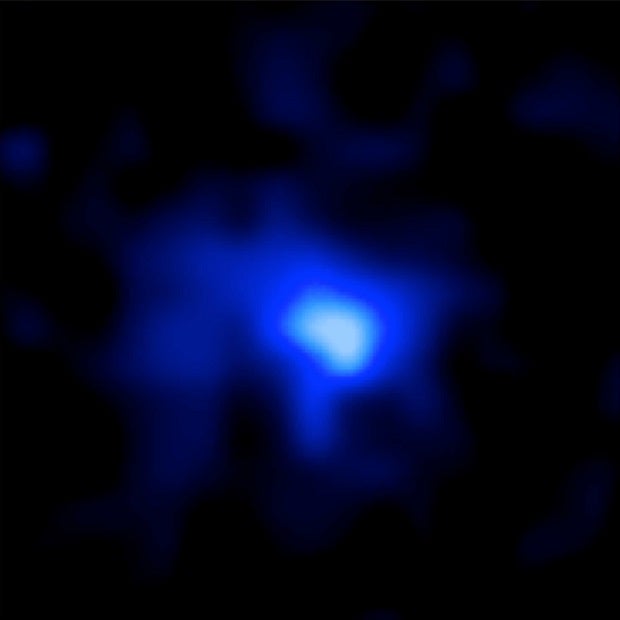 This handout photo provided by NASA and the European Space Agency, taken in 2013 with NASA’s Hubble space telescope, shows a galaxy from the farthest distance recorded: 13.1 billion light-years. It is from a time just 670 million years after the Big Bang. Astronomers have discovered a baby blue galaxy that is the farthest away in distance and time they have ever seen. It is from 13.1 billion years ago, during the universes first generation of galaxies. AP

WASHINGTON, United States — Astronomers have discovered a baby blue galaxy that is farther away in distance and time than any galaxy ever seen. It’s among the universe’s first generation of galaxies, from 13.1 billion years ago.

Yale and University of California Santa Cruz scientists used three different telescopes to spot and then calculate the age of the blurry infant galaxy. By measuring how the light has shifted, they determined the galaxy, called EGS-zs8-1, is from about 670 million years after the Big Bang.

Because when astronomers look farther away from Earth, they are looking back further in time, this is both the most distant galaxy and the furthest back in time. It’s 13.1 billion light-years away, in the constellation Bootes. A light-year is 5.8 trillion miles (9.3 trillion kilometers).

This beats the old record by about 30 million years, which isn’t much, but was difficult to achieve, said astronomer Garth Illingworth of the University of California Santa Cruz, who co-authored the paper in Astrophysical Journal Letters announcing the discovery.

The photo they took was from a crucial time in the early universe, after what was called the Dark Ages, when galaxies and stars were just starting to form and the universe was only one five hundredth the mass it is now, Illingworth said.

This galaxy — larger than most of the others from that time, which is why astronomers using the most powerful telescopes can see it now — was probably only about 100 million years old, but it was quite busy, Illingworth said.

“We’re looking here at an infant that’s growing at a great rate,” he said. The galaxy was giving birth to stars at 80 times the rate our Milky Way does now. “These objects would like nothing like our sun. It would look much, much bluer.”

Yale astronomer Pascal Oesch was looking through Hubble Space Telescope images in 2013 when he saw a bright object. He then used the Spitzer space telescope to see it again. The hardest work was confirming the age and distance using the ground-based Keck Observatory in Hawaii to separate light waves.