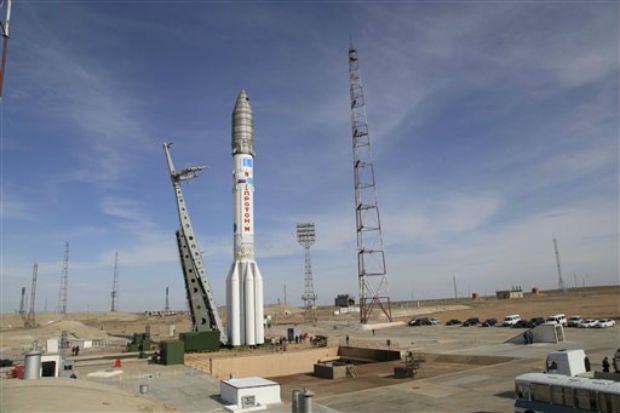 In this photo taken Thursday, April 24, 2014, a Proton-M rocket is installed at launched Baikonur launch pad in Kazakhstan. AP

KIEV, Ukraine — A Russian rocket carrying a Mexican satellite malfunctioned Saturday shortly after its launch — the latest mishap to hit Russia’s troubled space industry, whose Soviet-era glory has been tarnished by a series of launch failures.

The rocket, a Proton-M, was launched from the Russia-leased Baikonur launch pad in Kazakhstan. Roscosmos, the Russian Federal Space Agency, said a problem involving steering engines occurred in the rocket’s third stage about eight minutes into its flight, 161 kilometers (97 miles) above the Earth. The agency said the rocket and Boeing-constructed satellite did not reach their planned orbit and almost all of the debris from the two burned up in the atmosphere.

Authorities in eastern Siberia still searched for any possible debris in the Zabaikalsky region bordering Mongolia and China, Russian news agencies reported. There was no word if any was found.

The last failed launch of a Proton-M occurred exactly a year ago, also causing the loss of a telecommunications satellite. Since then, there have been six successful flights.

The Interfax news agency quoted industry sources saying the crash could result in the suspension of all upcoming Proton-M launches, including the next one in June for a British satellite.

In a separate space failure Saturday, Roscosmos also reported that a Progress spaceship attached to the International Space Station failed to ignite its engine, thus failing to adjust the orbit of the space station. The agency said it was looking into why that happened, but added that the space station’s crew was not in any danger from the incident.

Russia’s space program has seen a string of launch failures in recent years. Space experts say the program has been hampered by a brain drain and a steady erosion of engineering and quality standards.

“It seems that the Russian space industry is disintegrating with cosmic speed,” Yuri Karash, a leading space scientist and member of the Russian Academy of Space Science, told the Interfax news agency. Due to low pay and a lack of new projects, those working in the space industry are “far from the best specialists and have no interest in cobbling together cosmic stools such as rockets developed a half-century ago.”

In April, an unmanned Russian cargo ship carrying 3 tons of supplies failed to dock with the International Space Station after it went into an uncontrollable spin after the launch.

That failure prompted Roscosmos to delay both the landing of some of the space station’s crew and the launch of their successors. Roscosmos space agency chief Igor Komarov said the April 28 launch failure was caused by a leak of fuel tanks in the Soyuz rocket’s third stage. Left in low orbit, the Progress cargo spaceship fell to Earth over the Pacific on May 8.

Due to that failure, a Russian official said three of the orbiting space station’s six-person crew, who had been scheduled to return to Earth in early May, were asked to stay in orbit until early June and the launch of their replacement crew was pushed back from late May to late July.