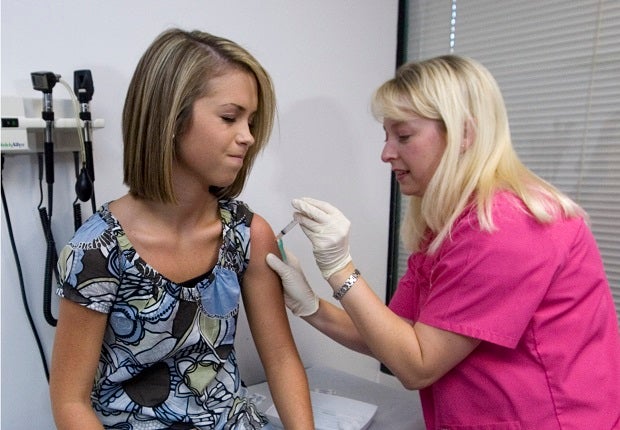 In this Tuesday, Dec. 18, 2007 file photo, Lauren Fant, left, winces as she has her third and final application of the Human Papillomavirus (HPV) vaccine administered by nurse Stephanie Pearson at a doctor’s office in Marietta, Georgia. Protecting girls from cervical cancer might be possible with just one dose of the HPV vaccine rather than the three that are now recommended, a new analysis has suggested on Wednesday, June 10, 2015. The study isn’t convincing enough to change vaccination strategies but if the results are confirmed, requiring just one dose of the vaccine could have a big impact on how many girls in both developed and developing countries get immunized. AP

PARIS, France – A single vaccine shot, rather than the recommended triple dose, may be enough to protect women against cervical cancer, a study said on Wednesday.

If further work validates the findings, there could be major gains for campaigns to vaccinate young women in poor countries, the authors said.

The research looked at Cervarix, which with another vaccine, Gardasil, is being rolled out to shield young girls from the human papillomavirus (HPV) which causes cervical cancer.

Cervarix is a so-called bivalent vaccine, targeting two types of virus — HPV 16 and 18 — that together are to blame for about 70 percent of cases.

The vaccine was initially approved to be given in three doses over six months, although some countries have cautiously switched to a two-dose schedule.

The new research, published in the journal The Lancet Oncology, suggests that this easier regimen could be taken even further.

The authors reported on an aspect of two big trials to test Cervarix among 7,500 women in Costa Rica aged 18-25 and more than 18,500 women aged 15-25 in the Asia-Pacific, Europe and the Americas.

Women in these trials were randomly assigned to receiving either Cervarix in three doses, or a hepatitis A vaccine.

However, 543 of the women in the Cervarix group only received one dose, mainly because their vaccination was discontinued due to pregnancy.

Four years after the trial took place, the researchers checked the health of the volunteers.

They found there was no difference in cancer rates among those who had received Cervarix, regardless of the number of doses they had received.

The authors, led by Cosette Wheeler of the University of New Mexico in Albuquerque, call for a new randomized study to see if these findings hold true on a larger scale and beyond just four years.

If the good news is confirmed, the big beneficiaries would be poor countries.

Cervical cancer is notoriously called a “silent killer” of women. It is the fourth commonest cause of cancer among women, and tragically is often diagnosed too late.

“If one dose is sufficient, it could reduce vaccination and administration costs as well as improve uptake,” said co-author Aimee Kreimer of the US National Cancer Institute.

“This is especially important in less developed regions of the world, where more than 80 percent of cervical cancer cases occur.”

In addition to cervical cancer, it can also cause genital warts and cancer of the anus and penis. For that reason, doctors in the United States and other countries recommend pre-teens of both sexes be vaccinated.