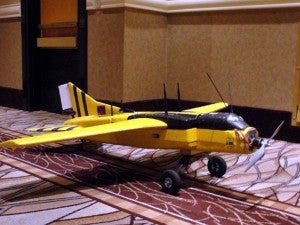 SAN FRANCISCO—The United States and Australia said Thursday that a cyber attack in either country would trigger a joint response, as they sought common ground in a changing world with China on the rise.

The Australian and US defense and foreign affairs chiefs added cyber war to their mutual security treaty during talks in San Francisco, where the two nations first signed the landmark accord in 1951 in the wake of World War II.

Australian Foreign Minister Kevin Rudd told a joint news conference that cyber warfare has already hit businesses in his country and warned that a larger attack “would have reverberations throughout the world.”

Officials said it was the first time that the United States has addressed cyber warfare in a bilateral defense treaty, although the NATO alliance has also discussed cyber threats.

“This is the battlefield of the future, and our ability to work together is extremely important to the challenge of being able to counter this very significant emerging threat,” US Defense Secretary Leon Panetta said.

The US military suffered a serious cyber attack in 2008 when a malicious flash drive — likely from a foreign spy agency — spread a virus and commandeered computers at US Central Command, which runs the war in Afghanistan.

While the United States has not identified a culprit for that attack, numerous Western experts believe that China has been ramping up its capabilities in cyber warfare.

The United States and Australia pledged a common stance on the rise of China, saying in a statement that they “welcome the emergence of a stable, peaceful and prosperous China that plays a constructive role in Asian and global affairs.”

Tensions between China and its neighbors have soared in recent years, with nations including Japan, Vietnam and the Philippines accusing Beijing of an increasingly aggressive stance over disputed territories.

In the joint statement, the United States and Australia called for unimpeded freedom of navigation in the tense South China Sea and urged restraint over its myriad disputes.

“We oppose the use of coercion or force to advance the claims of any party or interfere with legitimate economic activity,” the statement said.

Rudd, a Mandarin-speaking expert on China, voiced strong support for a US military presence in Asia, saying that it provided the security that has allowed prosperity in the region.

“If I look particularly at the extraordinary economic growth levels that have occurred in China, by the countries in Northeast Asia and Southeast Asia and now South Asia in recent decades, it’s because of the continued US strategic presence in the Asia-Pacific region,” Rudd said.

US Secretary of State Hillary Clinton also said that the alliance with Australia was crucial to “the fast-changing Asia-Pacific region.”

“Our alliance has provided a context for the region’s dynamic economic growth by underwriting peace and security and promoting trade and prosperity,” she said.

Australia has long been a steadfast military ally of the United States and stations some 1,500 troops stationed in Afghanistan. The United States has been looking to expand its military presence in Asia beyond bases in Japan and South Korea.

Australian Defense Minister Stephen Smith said that the two countries discussed allowing more US equipment to be stationed in Australia and expanding training between the two countries, but that no decisions had been made.

Officials said that discussions looked primarily at expanding existing cooperation and that there was no talk of opening new bases.

Military cooperation is also expected to remain high on the agenda in November when US President Barack Obama is scheduled to visit Australia.