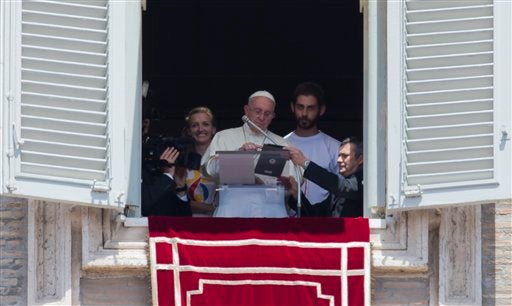 Pope Francis uses a tablet computer to sign himself up for next year’s World Youth Day in Poland, during the Angelus noon prayer he celebrated from the window of his studio overlooking St. Peter’s Square at the Vatican, Sunday, July 26, 2015. The pontiff was joined by two young people as he extended an invitation to the world’s Roman Catholic youth to join him in Krakow on July 25-31, 2016. AP PHOTO/ALESSANDRA TARANTINO

VATICAN CITY–Pope Francis on Sunday became the first person registered for next year’s World Youth Day festivities, using an iPad to sign up while addressing thousands of pilgrims and tourists in Saint Peter’s Square.

“Thanks to this electronic device, I signed up as a simple pilgrim,” Francis said, declaring himself the first person registered for next edition of the Youth Day celebration while flanked by two Polish youths.

The next edition of the global meeting of Catholic youths will be held next July in Krakow, Poland. It was most recently organized in Rio de Janeiro in 2013, shortly after Francis’ election as pope.

In Krakow, an electronic clock was installed on the Renaissance Holy Mary Basilica to count the days remaining until the event, initiated by Polish-born St. John Paul II in 1986. The late pontiff’s secretary, Card. Stanislaw Dziwisz, celebrated a Mass to draw attention to the youth festival, while Krakow residents danced a traditional Polonaise dance in the vast Market Square in a gesture of invitation. John Paul II was the first Polish pontiff who also served as Archbishop of Krakow.

Before digitally signing up for the event followed,  the Pope appealed for the release of Italian Jesuit priest Paola Dall’Oglio, who was kidnapped in Syria two years ago.

In addition to calling for Dall’Oglio’s liberation, Francis called for “renewed engagement by local and international authorities” to secure the release of all hostages being held.

Next year’s event will be the 31st edition of World Youth day.

It has since been held in countries on four continents.–With AP report

TOPICS: Ipad, Pope, Pope Francis, Social Media, Tablet, technology, World Youth Day
Read Next
A kinder, gentler social media in Singapore?
EDITORS' PICK
Mandaluyong fire put under control hours after it started
Leveling up your ‘lutong bahay’ with the kitchen companion you never knew you needed
Bato de la Rosa, Risa Hontiveros back bill increasing female recruitment quota in PNP
Quarantine violations still punishable despite deleted provisions in ‘Bayanihan 2’ – Bato dela Rosa
Someone from the Philippines can become $356 Million richer this Tuesday
Cherry Mobile teams up with Cloud Panda PH, launches online store
MOST READ
‘If I had not been SolGen, I will make you eat your words,’ Calida tells Coco Martin
51 percent of German firms holding back investments in PH, but not because of COVID-19
5 car dealership outlets shutting down
Senate OKs bill authorizing president to postpone opening of classes beyond August
Don't miss out on the latest news and information.