To bee, or not to bee: This is no bumbling insect audit 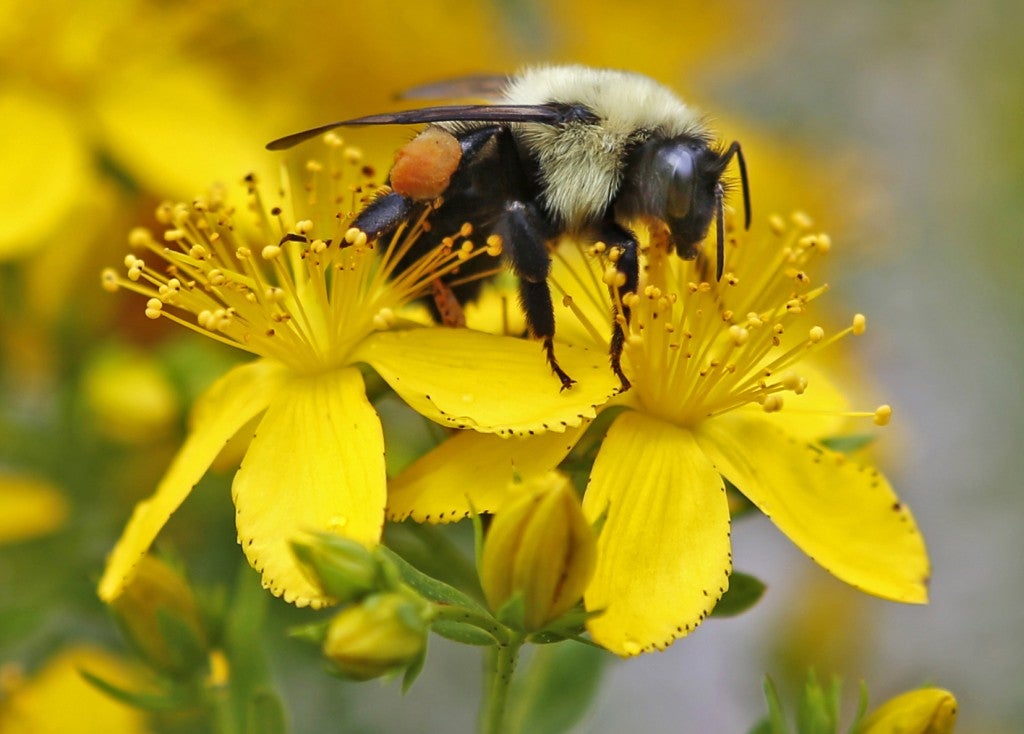 In this July 8, 2015 photo a bumblebee gathers nectar on a wildflower in Appleton, Maine. Maine scientists say the state needs to take a broad census of its bumblebees to ensure the security of its beloved blueberry and cranberry crops, and the state is enlisting its residents to make it possible. AP

APPLETON, Maine — Mad as a hornet, a bumblebee buzzes her wings in vain against the walls of the vial holding her captive. She alights briefly on the paper tab indicating her number, and then resumes scuttling around her plastic prison.

Her warden is Shaina Helsel, one soldier in a citizen army that is taking a census of Maine’s bumblebees in an effort to secure the future of the state’s blueberries, cranberries and tomatoes amid concern about the population of pollinators.

“Time, location, elevation play a factor in what species are where,” says Helsel, a biology student at University of Maine at Augusta. “It’s an interesting thing, going out and finding a bunch of different bumblebees. I’ve so far collected 105.”

The project is among a growing number of “citizen science” efforts around the country that are designed to motivate the public to gather data about pollinators. The Great Pollinator Project of New York City tallied nearly 1,500 observations of the city’s more than 200 bee species from 2007 to 2010. Across the continent, scientists and students at Washington State University also have tried to galvanize the public to collect data about bees, and more efforts are abuzz elsewhere.

Maine’s counting effort is called the Maine Bumblebee Atlas, and it has a budget of about $50,000. The state has been using its website, press releases, newspaper announcements and social media to recruit volunteers — and it’s been wildly successful.

The state has signed up 106 volunteers, has another 150 in the queue and even had to turn people away from two booked-up training sessions, says Beth Swartz, biologist for the state Department of Inland Fisheries and Wildlife.

Volunteers include bankers, teachers, students and retired paper mill workers, she says — everyone from tree-loving conservationists to “people whose professional lives are not anywhere near focused on the outdoors.”

The first training session for Maine’s citizen scientists was in May, and another took place in July, to be followed by another in spring 2016. The project is expected to last five years. The residents collect “observational data” about bumblebees and their habitats, while a specialist identifies the specimens they collect, Swartz says.

The national conversation about bee die-offs has largely centered on honeybees, which are different from the furry, chunky bumblebees. The Bee Informed Partnership said this year that about 5,000 beekeepers reported losing more than 40 percent of their honeybee colonies during a yearlong period that ended in April.

The numbers are troubling because of the billions of dollars in value honeybees provide to agriculture every year as pollinators. Scientists have cited factors that could be accelerating honeybee deaths, including parasites, pesticides, and poor nutrition from a lack of diversity in pollen and nectar sources.

In Maine, the focus is specifically on bumblebees, and state officials say species that are in decline have suffered from habitat loss, pesticides, and diseases and parasites introduced through commercially raised bumblebees.

Maine has 17 known native bumblebee species, and four of them became rarely observed starting in the 1990s, biologists say. Data are poor on the status of the other 13, and officials say a multi-year statewide survey will better assess the population, range and abundance of the bees, which are key pollinators of wildflowers and some of the state’s most important crops.

Engaging the public to collect data about the bees is a step toward conserving them, says Swartz.

“People are interested in the plight of the bees; bumblebees are interesting and charismatic,” she says. “Some of their work will give us quantitative data; we’ll be able to tell if that particularly species is declining or increasing.”

The status of bumblebees has generated concern around the country because the southern borders of their territories have crept northward over the past 40 years. Scientists say populations have declined or are disappearing because of warming weather.

Indeed, Maine’s bumblebees appear to be affected by climate change, says Frank Drummond, a professor of insect ecology at the University of Maine. The numbers of spring days when bumblebees can visit blueberries and other plants has been reduced by half since the early 1990s because of increased rain, he says.

That is worrisome for a state that relies on blueberries, a crop that supports a summer tourism industry and all manner of tasty confections, for $250 million per year in economic value.

“At that critical time of blueberry pollination, we’ve been getting lots of wet springs,” Drummond says.