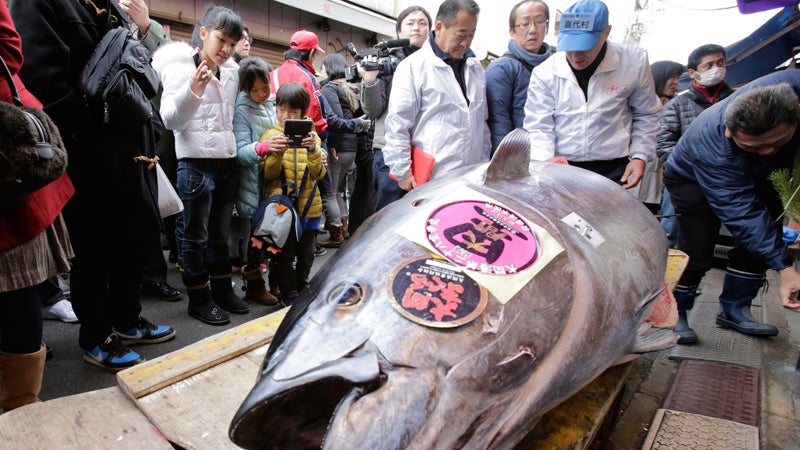 In this Jan. 5, 2014 file photo, people watch a bluefin tuna laid in front of a sushi restaurant near Tsukiji fish market after the year’s celebratory first auction in Tokyo. Researchers said they found the Omega-3 fatty acid found in fish oil may prevent mental disorders such as schizophrenia and psychosis. AP

PARIS, France – Omega-3, a fatty acid found in oily fish, may prevent the onset of schizophrenia and other psychotic disorders long after being consumed, according to a study released Tuesday.

Up to seven years after taking omega-3 supplements for 12 weeks, young people at “ultra-high” risk were less likely to have suffered the debilitating condition than a control group given a placebo, reported the study.

Schizophrenia is characterized by delusions and hallucinations, including hearing voices and seeing things that do not really exist.

It typically emerges during adolescence or early adulthood, either abruptly or gradually. There is no cure. Current treatment focuses on managing symptoms.

Nearly a decade ago, researchers led by Paul Amminger at the University of Melbourne showed in clinical trials that ingesting the fatty acid delayed a first episode of psychotic disorder in high-risk subjects by up to year.

In a follow up study, published in Nature Communication, Amminger and colleagues report that, nearly seven years later, only 10 percent of the omega-3 group developed psychosis compared to 40 percent in the placebo group.

“We show that omega-3 significantly reduced the risk of progression to psychotic disorder during the entire follow-up period,” the study concluded.

But the researchers stopped short of recommending that all at-risk individuals start taking the fatty acid, available as a non-prescription supplement and in many foods, including salmon, sardines and walnuts.

“Replication of the findings is needed,” Amminger said by email, noting the relatively small, 81 patient size of the trial. “Several replication trials are underway.”

Scientists still do not understand the underlying mechanism by which omega-3 might prevent the onset of schizophrenia, which has both genetic and environmental origins.

The illness occurs in approximately one percent of the population, but in 10 percent of people with a first degree relative with the disorder.

Fish oil rich in omega-3 “has no clinically relevant side effects, and thus is certainly a benign treatment option,” Amminger said.

“But patients need to be told that evidence (of its benefits) is limited.”

Meralco to refund consumers who paid their installment plan in full