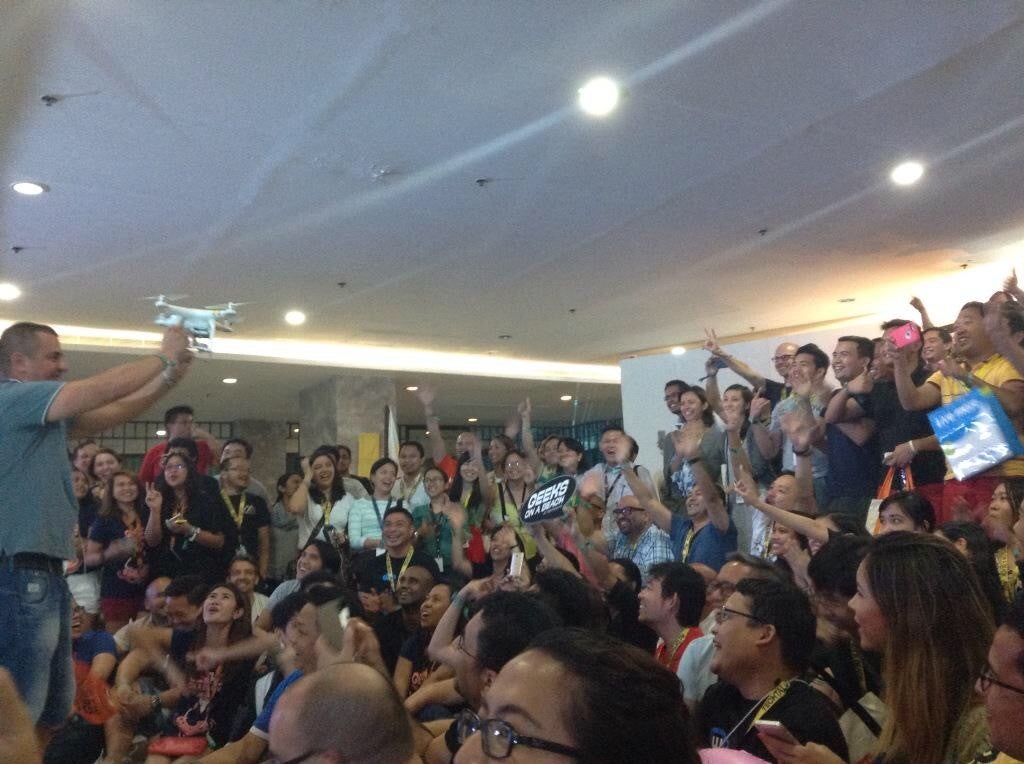 Geeks on a Beach participants pose for a “droufie” or a drone-taken group selfie. YUJI GONZALES/INQUIRER.net

BORACAY, Philippines—The academic sector should open up its doors to local startups in the country by sharing its wide repository of knowledge to budding entrepreneurs, particularly in the field of research.

This was what David Hall, head of the US Agency for International Development’s Science, Technology, Research and Innovation for Development (USAID-STRIDE) project, underscored during a breakout session of the 3rd Geeks on a Beach here on Thursday.

Emphasizing the academe’s potential in improving the emerging Philippine startup ecosystem, Hall said universities should be more “industry-friendly” by collaborating with and being always accessible to those who seek help from them.

“We want to build bridges between people and organizations outside universities and those inside. To me, a university is a repository of knowledge, and it should be there for anybody to access. Their doors should be open,” Hall said.

“If you need help for a research project, they should be there to help you do that. A university should have a portfolio on ways that they can work with people outside,” he added.

Hall said universities were “full of smart people,” but added that knowledge would be put to good use only if educational institutions would share it to other sectors like startups.

“Universities in the Philippines are somewhat obsessed with the creation of intellectual property and the revenue it would generate. It’s something universities should do, but should not always do,” Hall said, noting that some universities would only share information in exchange of money.

“That’s not what universities exist for. Profit is not the reason,” he added.

Noting that mere over the phone inquiries for contacts “would not get startups very far,” Hall said industries should be able to talk to somebody in universities that could point them to the right direction.

But even if universities were willing to share knowledge, Hall said factors such as lack of facilities prevented the academe and industries from collaborating.

“In state universities in the Philippines, it’s incredibly very difficult to buy high-value things to do research. Sometimes it takes more than a year to buy necessary equipment. One of the reasons why industries do not want to work with universities is because that’s slow. And that’s why faculty members leave the profession and go to something else. It’s frustrating,” he said.

USAID-STRIDE innovation adviser Jamie Jones said the “huge gap” between universities and industries could be addressed by the establishment of a knowledge and technology transfer office (KTTO).

“That office is the one who is going to understand the problems in the industry, considering the assets in the university—assets not only intellectual property but also expertise of students and faculty members, equipment and laboratory services,” she added.

Jones said universities could extend entrepreneurial support through the KTTO by linking their assets to existing challenges being faced by startup industries.

She added that “constructive relationships” would not be possible if universities would be too concerned about having their ideas stolen.

“For a successful academe partnership, universities should understand technology needs in the field, share the big picture, invest in long-term relationships, and communicate frequently, including external exchanges,” Jones added.

Now on its third year, GOAB gathers delegates and speakers in the startup industry in a series of discussions, activities, and networking.

GOAB returns to the world-famous island of Boracay, its inaugural venue in 2013, after it was held in Cebu last year. RC