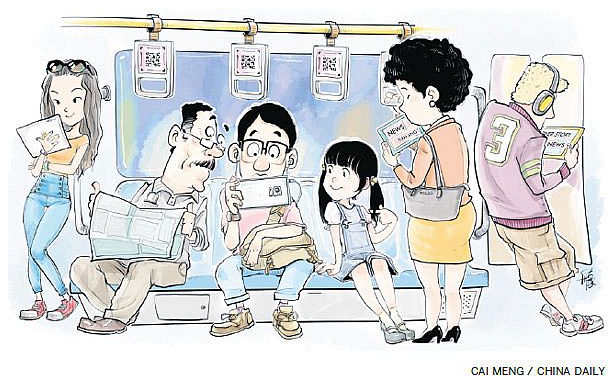 It is extremely difficult to find an empty room at the Beijing offices of Toutiao.com, a mobile news application.

With more than 800 technical staff, nearly every chair and desk is taken as employees constantly update the popular app, which features headline news, show business, sports and social media issues.

Launched in 2012, Toutiao has 290 million registered users and 27 million regular readers each day. When it started, the organization had just 20 staff but has been growing at a frantic pace since then.

“Whether they are in the subway or on trains, as long as our customers have their smartphones, they can access news and other information via our app,” Lin Chufang, vice-president in charge of marketing at Toutiao, said.

Last year, the company received $100 million in another round of financing from Sequoia Capital, which is run by legendary Chinese investor Shen Nanpeng, and Weibo, the Twitter-like online platform in China that is listed in New York.

Shen also has a stake in Ctrip, the largest online travel agency in China, while Sequoia Capital is a major venture capital firm and a key investor in DJ-Innovations, or DJI, the largest commercial drone manufacturer in the world based in Shenzhen, Guangdong province.

With investors like these, it is hardly surprising that Toutiao, which means “Headline Today” in English, has taken off after an initial round of investment back in 2012. It is now valued at $500 million.

But then, a key element of Toutiao’s business plan was to splash out on copyright content from 1,000 media companies in China as well as partnerships deals with thousands of freelance journalists for video clips and news items.

“With mobile phones, people can read the latest news in a more efficient way,” Zhang Yiming, founder of Toutiao.com and head of the app’s parent company Beijing Bytedance Technology Co Ltd, said. “It so much easier now.”

While Toutiao has yet to release detailed financial figures or media contract fees, the privately owned company has increased advertising revenue and is now breaking even. But it still has no plans to branch out into providing original content as the company does not have a full time team of journalists in place

“We will stick to being a news platform,” Zhang said. “That is what we do best.”

The success of Toutiao illustrates the problems that mainstream media firms, such as newspaper groups, face when trying to stabilise revenue in a changing landscape dominated by online rivals.

Last month, a report published by the China Internet Network Information Center showed that news apps were only second to instant messaging players, such as WeChat and QQ, both part of Tencent Holding Ltd, when it came to online traffic. More than 459 million people clicked onto news apps by the end of June, roughly 77 per cent of the Internet users in China, according to the Beijing-based CNNIC, a government-backed industry body.

“The number of those who access news via smartphones has grown 10.6 per cent in the first half of this year, compared with the 6.4 per cent of instant messaging users,” the report highlighted.

But despite breakneck growth in the sector, industry insiders have warned that many of the new news kids on the block might struggle to stay afloat.

Already major social networking apps, such as WeChat and Weibo, are beefing up their news coverage and attracting online readers from media startups.

“Unlike the personal computer-based Internet era, in which news was gathered by major portals, such as sohu.com and sina.com, the mobile online industry has produced a wide range of apps in an extremely competitive market,” Tao Jingqi, director of research at Talking Data, an Internet data service provider, said.

Last month, a survey released by Talking Data reported that the penetration rate of news apps among mobile Internet users was about 60 per cent, lower than CNNIC’s 77 per cent.

“This is a mature market and will continue to grow steadily,” Tao said. “But I don’t think we will see a dramatic increase in the sector.”

Her views were echoed by Li Senhe, chief executive officer of Zaker, a mobile news app, which collects content from other websites through copyright deals and employs nearly 200 staff.

This allows users to build their own magazine based on individual interests. “The days when you just launched a news app and users rushed to download it are gone,” Li said.

Indeed, the marketplace has become as crowded as a subway train during rush hour.

Dozens of news apps have sprung up in China. They range from those rolled out by established newspaper and magazine companies to online portals and media providers, such as Toutiao and Zaker.

In this melting pot, apps run by traditional online sites are dominating the Internet media scene, but that could be changing. “Apps designed to provide news to individual tastes are now showing great potential,” Tao, of Talking Data, said.

Tencent, which has the largest market share in the news app industry through its own dedicated portal, Tencent News, has already made significant moves to tap into this trend.

With 250 million active daily users, the company plans to radically update its service. “Personalising our content will be an important part of the apps development,” Wang Yongzhi, editor-in-chief at Tencent.com, said.

Finding a niche in the market will be crucial for news apps if they are to survive.

At Zaker, Li has worked hard to cultivate a distinctive brand since setting up the company in Guangzhou in 2011 with the help of $10 million in investment.

Today, Zaker has 12 million daily users and the majority of them are from first-tier cities in China, such as Beijing, Shanghai and Shenzhen. Most have at least a college degree, drive a car, buy luxury brands and travel extensively, according to company data.

“Eventually, each player will cover a specific group of users and provide news and content in line with their demand and taste,” Li said. “That is what we are doing.”

Toutiao is moving in a similar direction. Big data, a broad term for processing vast amounts of complex statistics, which can be boiled down into market and consumer trends, will be vital in working out the right strategy.

The company already uses 4,000 servers to crunch the numbers and will add another 2,000 by the end of the year.

“We first analyse all news content, label it and sort it by keywords,” Lin, vice-president at Toutiao, said. “Then we analyse our users and match the content to their tastes.”

This in turn should help drive customised advertising by matching the right brands with the right consumer, Wang Shicong, an analyst at Analysys International, pointed out.

“Advertisers are looking for a target audience and big data can do that,” Wang said.

In January, Analysys International reported that the online advertising market in China grew 53.5 per cent last year to 153.52 billion yuan compared to 2013. It predicted that the sector would grow to 319 billion yuan by 2017.

Zaker, which has yet to release detailed financial figures, generates most of its income from advertising.

But CEO Li is looking to expand the company’s revenue base. In June, Zaker launched a range of new services, including online movies and travel packages.

“The news app sector cannot live happily ever after through advertising income alone,” he said. “We have to explore new models and opportunities to grow in the future. You have to stay ahead of the pack.”

TOPICS: Apps, China, Company, Media, Mobile, News, technology, Toutiao.com
Read Next
At a loss for words while using KakaoTalk? Let Guyito do the ‘talking’
EDITORS' PICK
Current dominant strain of COVID-19 more infectious than original—study
Smart releases Hyun Bin’s second TVC
EuroMillions Superdraw: A lottery draw unlike any other is coming to the Philippines
‘Justice will be done,’ Duterte assures as he vowed probe on Jolo incident to bare ‘truth’
Water remains our saving grace right now
DOLE: Return of OFWs’ remains from Saudi to be ‘delayed,’ deadline moved to ‘early next week’
MOST READ
Duterte tells military: No other president looked at you the way I did
Locsin warns of ‘severest response’ if China’s army drills in SCS ‘spill over’ to PH domain
BREAKING: Duterte signs anti-terror bill into law
Vico: Cleanup of bidding process saved Pasig gov’t P415M
Don't miss out on the latest news and information.