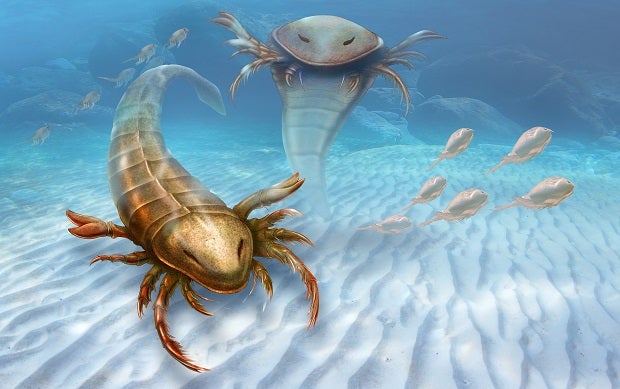 This rendering provided by Yale University shows a Pentecopterus decorahensis. Earth’s first big predatory monster was a weird water bug, newly found fossils show. Almost half a billion years ago, Earth’s dominant large predator was a sea scorpion that grew to 5 feet 7 inches with a dozen claw arms sprouting from its head and a spike tail, according to a new study. AP

Almost half a billion years ago, way before the dinosaurs roamed, Earth’s dominant large predator was a sea scorpion that grew to 5 feet 7 inches (170 centimeters), with a dozen claw arms sprouting from its head and a spike tail, according to a new study.

Scientists found signs of these new monsters of the prehistoric deep in Iowa, of all places.

Geologists at the Iowa Geological Survey found 150 pieces of fossils about 60 feet (18 meters) under the Upper Iowa River, part of which had to be temporarily dammed to allow them to collect the specimens. Then scientists at Yale University determined they were a new species from about 460 million years ago, when Iowa was under an ocean

Then, all the action was in the sea and it was pretty small scale, said James Lamsdell of Yale, lead author of the study published Monday in the journal BMC Evolutionary Biology.

“This is the first real big predator,” Lamsdell said. “I wouldn’t have wanted to be swimming with it. There’s something about bugs. When they’re a certain size, they shouldn’t be allowed to get bigger.”

Technically, this creature — named Pentecopterus decorahensis, after an ancient Greek warship — is not a bug by science definitions, Lamsdell said. It’s part of the eurypterid family, which are basically sea scorpions.

Those type of creatures “are really cool,” said Joe Hannibal, curator of invertebrate paleontology at the Cleveland Museum of Natural History. Hannibal wasn’t part of the study, but praised it for being well done, adding “this species is not particularly bizarre — for a eurypterid.”

There were larger sea scorpions half way around the world at the same time but those were more bottom feeders instead of dominant predators, he said.

Lamsdell could tell by the way the many arms come out of the elongated head how this creature grabbed prey and pushed it to its mouth.

“It was obviously a very aggressive animal,” Lamsdell said. “It was a big angry bug.”