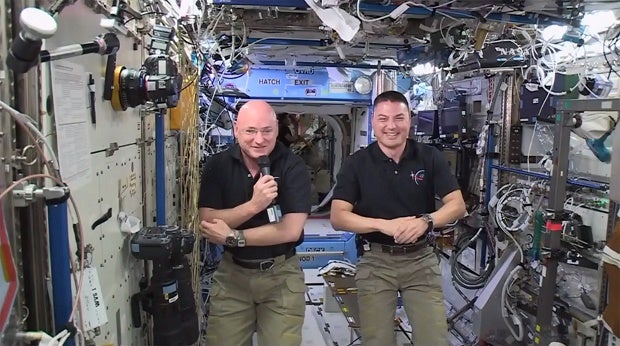 In this Tuesday, Sept. 15, 2015 image made from video provided by NASA, astronauts Scott Kelly, left, and Kjell Lindgren, aboard the International Space Station, speak to actors from the movie “The Martian.” On Tuesday, Kelly and Russian cosmonaut Mikhail Kornienko clocked in for their 171st day aboard the International Space Station since arriving on March 27. The two are scheduled to spend 342 days in space. AP

Kelly marked the midway point of his yearlong space mission Tuesday. He’s sharing the voyage with Russian cosmonaut Mikhail Kornienko; the two experienced fliers arrived at the International Space Station in March and won’t return to Earth until next March.

“It’s a big milestone,” Kelly said, “but I’m not going to start counting days down yet. I think I’m going to wait until March, then I’m going to allow myself to count how many days I have remaining. I’m counting up for the time being.”

For the record, Kelly passed the 171-day mark Tuesday, with 171 more days to go.

At the end, it will be just a tad short of a full year, but it will be enough to easily break NASA’s current record of seven months for a single spaceflight. The Russians, on the other hand, still will hold the world record of 14 continuous months in space, set in the mid-1990s.

To mark the occasion, Kelly took time out to chat with two cast members from the upcoming movie, “The Martian.” The actors spent the day touring Johnson Space Center in Houston. He also received “Happy Half Day” greetings from his girlfriend, a public affairs employee at Johnson.

Kelly told the actors — Sebastian Stan and Mackenzie Davis — that if he could do or have anything, he’d choose “the ability to leave here.”

“Something people don’t recognize is that being on the space station is probably a lot like being in some kind of confinement — like isolation,” he said. “Not having the ability to leave is … an all-present feeling. Although I’m not claustrophobic at all, it would be nice to get outside. And I’m not talking about outside like on a spacewalk, but ‘put my feet in the grass and feel the wind on my face’ kind of outside.”

What’s the first thing he wants to eat when he gets back?

On the plus side, the 51-year-old former fighter and test pilot said despite all the work, he’s managed to develop “a pretty mean flip” in weightlessness over the past six months. His experiments include comparisons with his Earth-bound identical twin, Mark Kelly, a former astronaut.

Kelly and American colleague Kjell Lindgren said they’re looking forward to seeing “The Martian” aboard their orbiting home, as soon as it makes its debut Oct. 2. The main astronaut character is played by Matt Damon, who briefly chatted by phone with the two US astronauts last month. Both spacemen are big fans of the novel by Andy Weir.