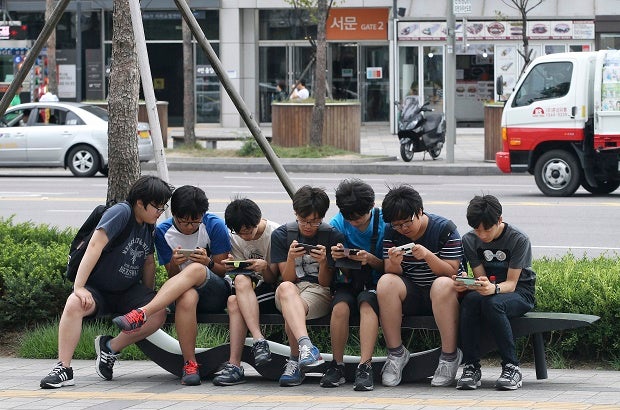 In this July 16, 2015, file photo, South Korean high school students play games on their smartphones on a bench on the sidewalk in Seoul, South Korea. Security researchers say they found critical weaknesses in a South Korean government-mandated child surveillance app, vulnerabilities that could have allowed hackers to easily violate the private lives of the country’s youngest citizens. AP FILE PHOTO

“There was literally no security at all,” Cure53 director Mario Heiderich said. “We’ve never seen anything that fundamentally broken.”

“We were overconfident as there were no security or hacking issues for more than three years,” said Noh Yong-lae, the MOIBA manager in charge of the app.

Smart Sheriff and its fellow surveillance apps are meant to serve as electronic baby sitters, letting parents know how much time their children are spending with their phones, keeping kids off objectionable websites and even alerting parents if their children send or receive messages with words like “bully” or “pregnancy.”

In April, Seoul required new smartphones sold to those 18 and under to be equipped with such software, a first-of-its-kind move, according to Korea University law professor Park Kyung-sin. The Korean Communications Commission has promoted Smart Sheriff and schools have sent out letters to parents encouraging them to download the app, which is free.

Sometime afterward, Citizen Lab, based at the University of Toronto’s Munk School of Global Affairs, and Cure53, acting on a request from the Washington-based Open Technology Fund, began sifting through Smart Sheriff’s code.

What they found was “really, really bad,” Heiderich said.

Children’s phone numbers, birth dates, web browsing history and other personal data were being sent across the Internet unencrypted, making them easy to intercept. Authentication weaknesses meant Smart Sheriff could easily be hijacked, turned off or tricked into sending bogus alerts to parents. Even worse, they found that many weaknesses could be exploited at scale, meaning that thousands or even all of the app’s 380,000 users could be compromised at once.

“Smart Sheriff is the kind of baby sitter that leaves the doors unlocked and throws a party where everyone is invited,” said Collin Anderson, an independent researcher who collaborated with Citizen Lab on its report.

MOIBA says it quickly fixed the app, but every security professional the AP spoke to was skeptical.

“We suspect that very little of these measures taken actually remedy issues that we’ve flagged in the report,” Anderson said, adding that he believed at least one of MOIBA’s fixes had opened a new weakness in the program.

Ryu Jong-myeong, chief executive of security firm SoTIS, said the app did now appear to be encrypting its transmissions. But he was scathing about some of the other failures uncovered by Citizen Lab, giving Smart Sheriff’s server infrastructure a security rating of zero out of 10.

“People who made Smart Sheriff cared nothing about protecting private data,” he said.

“From a hacker’s point of view, (the door) stays open,” he said.

Many smartphone applications are unsafe, leaking private data or sending or storing it in risky ways.

“This is not just a fitness tracker,” Deibert said. “It’s an application meant to satiate parents’ concerns about their children’s use of mobile or social media, which is in fact putting them at more risk.”

Park, the law professor, said the security flaws should push the government “to revisit the whole idea of requiring a personal communication device to be equipped with software that allows another person to monitor and control that device.”

Some South Korean parents may soldier on with Smart Sheriff regardless. Lee Kyung-hwa, a mother of two who leads a parents’ group that endorses child surveillance, says all the app needs is an upgrade.

“If mothers feel happy thanks to the app, it is still helpful,” she said.

But Kim Kha Yeun, a general counsel at libertarian-minded Open Net Korea, predicted that the revelations would turn parents against the technology.

“If they knew that the apps infect and endanger their children, I don’t think any South Korean parents would want their children to have this monitoring app,” she said.

The research has already prompted one mother to say she’s uninstalling Smart Sheriff.

Yoon Jiwon told The Associated Press that she had previously been put off by the way in which the battery-hungry app kept sending her misleading alerts about her sons being bullied. That prompted her to cross-examine them about each chat and text message, breeding frustration and mistrust.

She plans to uninstall the app after learning about the security weaknesses uncovered by Citizen Lab and now says Smart Sheriff was not a good way of interacting with her children.

“It’s just not right for a mom to snoop on everything,” she said.