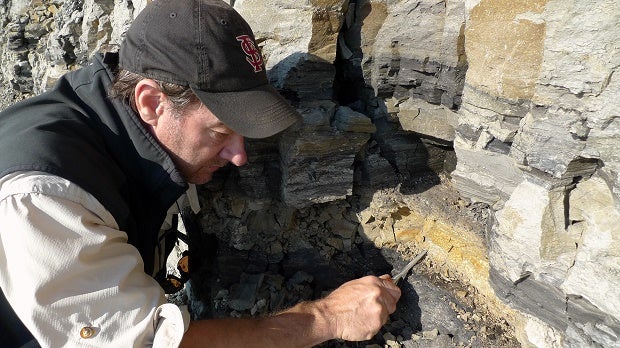 In this 2013 photo released by the University of Alaska Museum of the North, researcher Greg Erickson works a fossil site in the Liscomb Bonebed near Nuiqsut, Alaska. Researchers at the University of Alaska Fairbanks have found a third distinct dinosaur species documented on Alaska’s oil-rich North Slope. The new species is a type of hadrosaur, a duck-billed plant-eater. AP

A paper published Tuesday concluded that fossilized bones found along Alaska’s Colville River were from a distinct species of hadrosaur, a duck-billed dinosaur not connected to hadrosaurs previously identified in Canada and the Lower 48 states.

It’s the fourth species unique to northern Alaska. It supports a theory of Arctic-adapted dinosaurs that lived 69 million years ago in temperatures far cooler than the tropical or equatorial temperatures most people associate with dinosaurs, said Gregory Erickson, professor of biological science at Florida State.

“Basically a lost world of dinosaurs that we didn’t realize existed,” he said.

The northern hadrosaurs would have endured months of winter darkness and probably snow.

“It was certainly not like the Arctic today up there — probably in the 40s (5 to 9 degrees Celsius) was the mean annual temperature,” Erickson said. “Probably a good analogy is thinking about British Columbia.”

The next step in the research program will be to try to figure out how they survived, he said.

Mark Norell, curator of paleontology at the American Museum of Natural History in New York, said by email that it was plausible the animals lived in the high Arctic year-round, just like musk oxen and caribou do now. It’s hard to imagine, he said, that the small, juvenile dinosaurs were physically capable of long-distance seasonal migration.

“Furthermore, the climate was much less harsh in the Late Cretaceous than it is today, making sustainability easier,” he said.

Most of the fossils were found in the Liscomb Bone Bed more than 300 miles (480 kilometers) northwest of Fairbanks and a little more than 100 miles (160 kilometers) south of the Arctic Ocean. The bed is named for geologist Robert Liscomb, who found the first dinosaur bones in Alaska in 1961 while mapping for Shell Oil Co.

Liscomb thought they came from mammals. They remained in storage for about two decades until someone identified the fossils as dinosaur bones, said Pat Druckenmiller, earth sciences curator at the University of Alaska Museum.

Researchers over the next 25 years excavated and catalogued more than 6,000 hadrosaur bones, far more than any other Alaska dinosaur. Most were from small juveniles estimated to have been about 9 feet (2.7 meters) long and 3 feet (90 centimeters) tall at the hips.

“It appears that a herd of young animals was killed suddenly, wiping out mostly one similar-aged population to create this deposit,” Druckenmiller said.

They initially were thought to be Edmontosaurus, a hadrosaur well-known in Canada and the US, including Montana and South Dakota. The formal study of the Alaska dinosaur, however, revealed differences in skull and mouth features that made it a different species, Druckenmiller said.

Researchers have dubbed the creature Ugrunaaluk kuukpikensis (oo-GROO’-nah-luk KOOK’-pik-en-sis). The name means “ancient grazer” and was chosen by scientists with assistance from speakers of Inupiaq, the language of Alaska Inupiat Eskimos.

The dinosaurs grew up to 30 feet (9 meters) long. Hundreds of teeth helped them chew coarse vegetation, researchers said. They probably walked primarily on their hind legs, but they could walk on four legs, Druckenmiller said.

The Liscomb Bone Bed during the Cretaceous Period was hundreds of miles farther north in what’s now the Arctic Ocean, Druckenmiller said.

Researchers are working to name other Alaska dinosaurs.

“We know that there’s at least 12 to 13 distinct species of dinosaurs on the North Slope in northern Alaska,” Druckenmiller said. “But not all of the material we find is adequate enough to actually name a new species.”

They have found no evidence of crocodiles, turtles, lizards or other ectotherms, the cold-blooded animals that depend on the sun or another external source of heat to regulate their body temperature.

“It tells us something right there about the biology of these dinosaurs,” Erickson said, an indication they were more like birds and mammals.