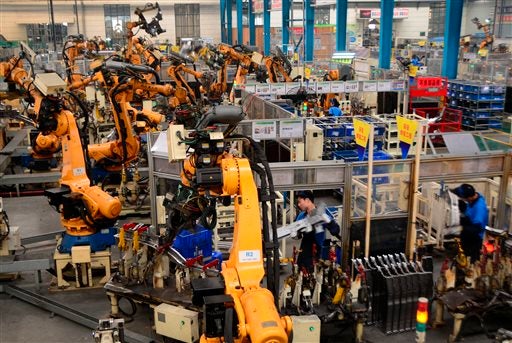 In this June 26, 2015 photo, workers assemble parts next to robot arms at an auto parts manufacture factory in Dafeng city in east China’s Jiangsu province. AP

Now, factories are rapidly replacing those workers with automation, a pivot that’s encouraged by rising wages and new official directives aimed at helping the country move away from low-cost manufacturing as the supply of young, pliant workers shrinks.

It’s part of a broader overhaul of the economy as China seeks to vault into the ranks of wealthy nations. But it comes as the country’s growth slows amid tepid global demand that’s adding pressure on tens of thousands of manufacturers.

With costs rising and profits shrinking, Chinese manufacturers “will all need to face the fact that only by successfully transitioning from the current labor-oriented mode to more automated manufacturing will they be able to survive in the next few years,” said Jan Zhang, an automation expert at IHS  Technology Shanghai.
Shenzhen Rapoo  Technology  Co. is among the companies at ground zero of this transformation. At its factory in the southern Chinese industrial boomtown of Shenzhen, orange robot arms work alongside human operators assembling computer mice and keyboards.

“What we are doing here is a revolution” in Chinese manufacturing, said Pboll Deng, Rapoo’s deputy general manager.
The company began its push into automation five years ago. Rapoo installed 80 robots made by Sweden’s ABB Ltd. to assemble mice, keyboards and their sub-components. The robots allowed the company to save $1.6 million each year and trim its workforce to less than 1,000 from a peak of more than 3,000 in 2010.

Such upgrading underscores the grand plans China’s communist leaders have for industrial robotics. President Xi Jinping called in a speech last year for a “robot revolution” in a nod to automation’s vital role in raising productivity.

Authorities have announced measures such as subsidies and tax incentives over the past three years to encourage industrial automation as well as development of a homegrown robotics industry.

Some provinces have set up their own “Man for Machine” programs aimed at replacing workers with robots.

Guangzhou, the provincial capital, aims to have 80 percent of manufacturing automated by 2020.

A relentless surge in wages is adding impetus to the automation revolution. China relied on a seemingly endless supply of cheap labor for decades to power its economic expansion. That equation is changing as the country’s working age population stops growing and more Chinese graduate from university, resulting in a dwindling supply of unskilled workers, annual double-digit percentage increases in the minimum wage and rising labor unrest.

Deng said Rapoo’s wage bill rising 15-20 percent a year was one big factor driving its use of robots.

“Frontline workers, their turnover rate is really high. More and people are unwilling to do repetitive jobs. So these two issues put the manufacturing industry in China under huge pressure,” he said.

China’s auto industry was the trailblazer for automation, but other industries are rapidly adopting the technology  as robots become smaller, cheaper and easier to use. It now only takes on average 1.3 years for an industrial robot in China to pay back its investment, down from 11.8 years in 2008, according to Goldman Sachs.

Companies such as electronics maker TCL Corp. are using robots to produce higher-value goods. At one factory in Shenzhen, TCL uses 978 machines to produce flat screen TV panels. At another TCL plant in Hefei, near Shanghai, steel refrigerator frames are bent into shape before being plucked by a blue Yasakawa robot arm that stacks them in neat rows for further assembly.

Fridges and big washing machines have heavy internal components, so “if you use automated robots to make them, they also let you cut your labor intensity by a lot,” said TCL Chairman Tomson Li.

China held the title of world’s biggest market for industrial robots for the second straight year in 2014, with sales rising by more than half to 56,000, out of a total of 224,000 sold globally, according to the International Federation of Robotics.

There’s plenty more room for explosive sales growth. China has about 30 robots for every 10,000 factory workers compared with 437 in South Korea and 152 in the United States. The global average is 62. Beijing wants China’s number to rise to 100 by 2020.

The switch to robots has raised fears that it will contribute to slowing job though there are few signs that’s happening yet.

Deng said Rapoo hasn’t had to resort to layoffs. Rather, the company is just not replacing workers who quit.
“It’s not simply replacing the operation of workers by robot. We do more than that. We are making a robot platform” in which humans and machines work together to make production more flexible, he said.

On a recent tour of Rapoo’s factory, Deng pointed out the efficiencies.

As a conveyor belt carried circuit boards out of an industrial soldering machine, a robot arm removed them from metal jigs and placed them on another belt. Human workers typically do this job in other factories, Deng said, but turnover is high because of the heat and repetitiveness.

In a glass-walled room, robots assembled receivers for wireless mice, tasks that were previously done by 26 people, Deng said. Now, one or two humans supervise as a laser automatically fuses shut metal USB plug housings, four at a time, while steps away, robot arms slide the plugs into plastic sleeves.

Automation will allow Chinese factories to grab a bigger share of industries where accuracy and precision are crucial, such as aerospace, medical devices and optical components, said Derick Louie, of the Hong Kong Productivity Council.

Makers of toys and other low-profit consumer goods, however, “probably will have to move outside of China due to rising labor costs and environmental taxation,” he said.