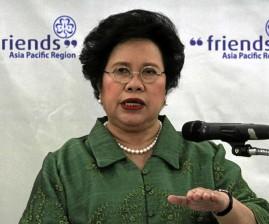 Sen. Miriam Defensor Santiago is urging her colleagues in the Senate not to approve any additional funds for the nationwide free Wi-Fi initiative without looking into the status of the project, which the Department of Science and Technology (DOST) vowed to finish by December.

But the DOST, according to her, is asking for another P1.6 billion for the project in its proposed P17.8-billion budget in 2016. DOST officials are set to face senators for budget deliberations on Oct. 6.

“Was it not too ambitious for an agency to embark on a P3-billion project this year when it failed to implement several projects worth less than a billion in 2014? Of course Internet-loving Filipinos want free Wi-Fi, but can the DOST deliver on its promises?” she said in a statement on Friday.

Santiago, author of the Magna Carta for Internet Freedom, said she would file a resolution on Monday, urging a Senate inquiry on the DOST’s Information and Communications Technology Office (ICTO), which, according to state auditors, underspent by P827.6 million in 2014.

She cited a recently released Commission on Audit (COA) report, which found that the ICTO faced roadblocks in two major projects in 2014, and thus spent only P65.2 million of the P892.8 million in e-Government funds programmed that year.

The senator said that based on the report, bulk of the unused funds were earmarked for the Integrated Government Philippines (iGovPhil) Project, which would have set up a shared network among offices delivering common services, and the Philippines Community eCenter (CeC) Program.

State auditors, she said, claimed that the underspending was the result of procurement delays, as they questioned whether the ICTO bids and awards committee for special projects was fully capable of handling high-value projects.

“Government efforts to pursue ICT projects are laudable. We cannot lag behind other countries on that front. But before the government can even dream of implementing big-ticket projects, it must improve the capacity of responsible agencies,” Santiago said.

The senator said she also agreed with COA recommendations for the ICTO to carefully select members of bids and awards committees for priority projects and to improve trainings on procurement bidding to help the agency efficiently perform its functions.

“Besides flagging procurement inefficiencies, state auditors also criticized how a total of P186.7 million in project and maintenance and operating expenses funds of the ICTO reverted to the national treasury, an indicator, they said, of poor monthly cash programming,” she said.

Santiago said underspending should be avoided not only in the DOST, but in all agencies.

“This government cannot keep underspending and, at the last minute, force agencies to accelerate fund disbursement to buoy the economy,” she further said. IDL