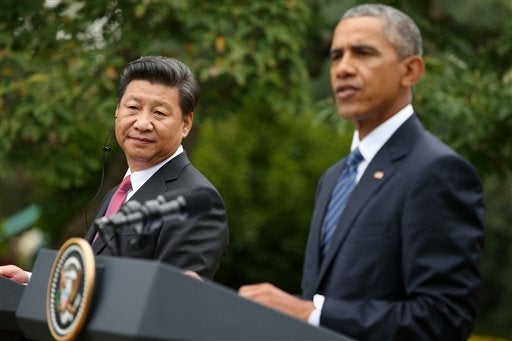 WASHINGTON — President Barack Obama said Friday he and Chinese President Xi Jinping had agreed not to conduct or support cybertheft of business secrets, with the U.S. president delivering a blunt message to his Chinese counterpart that such espionage “has to stop.”

Obama, in a Rose Garden news conference, said the agreement was progress — but he added that “I have to insist our work is not yet done.”

Xi, for his part, agreed that the countries would not “knowingly support” cybertheft and promised to abide by “norms of behavior” in cyberspace.

“Confrontation and friction are not the right choice for both sides,” Xi said.

Both countries claim they don’t engage in cybertheft of commercial secrets, one of the deep differences that have threatened ties between the world’s two largest economies..

Overall, Obama said, the two leaders’ state visit had yielded “an extremely productive meeting,” adding that their candid conversations on areas of disagreement “help us to understand each other better.”

On the thorny issue of China’s disputed territorial claims, which have unnerved some U.S. partners in Asia, Xi said China has “the right to uphold our own sovereignty.” But he promised respect for freedom of navigation and overflight.

On climate change, an area where the two countries have been cooperating, China said it will commit $3.1 billion to help developing countries reduce carbon emissions, one of a series of measures taken with the U.S. to combat global warming.

A joint statement listed a series of measures taken to flesh out their pledge, made last year, to work to reduce emissions.

Xi, speaking through a translator, called on the U.S. and China to be “broadminded about differences and disagreements.” He made no specific mention of the controversial issues Obama raised.

The White House’s concerns over China’s cyberattacks in the U.S. have caused particular strain ahead of Xi’s visit. Obama has faced calls from some Republican presidential candidates to scale back the grandeur of Xi’s visit, which included an Oval Office meeting, a joint news conference in the Rose Garden and a glitzy black-tie dinner. TVJ