Bill Gates and UN say malaria could be eradicated by 2040 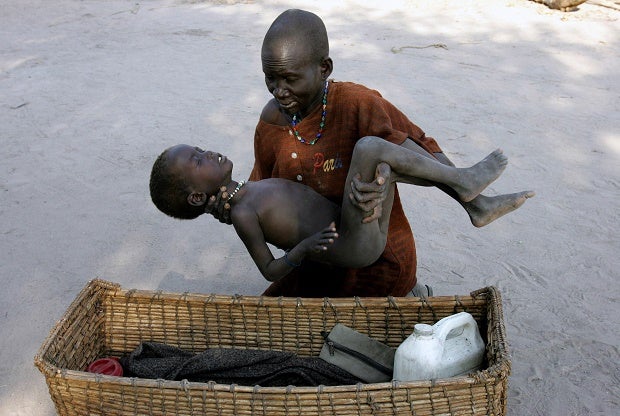 In this Dec. 21, 2005 file photo, a mother gently places her son in a basket as she takes him to a Medecins Sans Frontieres clinic after he contracted malaria, in Lankien, Southern Sudan. Malaria could be wiped out by 2040, despite the lack of an effective vaccine, previous failed attempts to eradicate the disease and drug resistance problems, the United Nations and Microsoft founder Bill Gates said in a report released on Monday, Sept. 28, 2015. AP Photo

LONDON, United Kingdom—Malaria could be wiped out by 2040, despite the lack of an effective vaccine, previous failed attempts to eradicate the disease and drug resistance problems, the United Nations and Microsoft founder Bill Gates said in a report released on Monday.

Gates and Ray Chambers, the UN secretary-general’s special envoy for malaria, said getting rid of the parasitic disease could ultimately save 11 million lives and provide $2 trillion in economic benefits. In a statement, Gates described eradication as “the only sustainable solution.” His foundation has been one of the major donors to malaria control programs.

The report calls for a doubling of the money spent on malaria by 2025 and new ways to control the mosquitoes that spread the disease.

Past attempts to get rid of malaria have failed; the World Health Organization and partners had targeted the end of 2015 for cutting cases to “near zero.” About 500,000 children are killed by malaria every year and it’s unknown whether cases are going up or down in the worst-hit countries.

Despite a regulatory approval recommendation for the world’s first malaria vaccine, the shot only protects about one third of children. Resistance to many malaria drugs has been detected and more than a third of people at risk have no protective bed nets.

Officials are also still struggling to wipe out guinea worm and polio—smallpox is the only disease to have been eradicated.

“It’s good to be ambitious in global health but this is another ambition that misses a crucial element of delivering on such goals: health systems,” said Sophie Harman, a public health expert at Queen Mary University in London. “Grand and glitzy eradication campaigns overlook the real necessity of financing everyday health systems.”

Harman also doubted whether the 2040 goal was realistic, citing the previously missed polio targets. WHO had originally hoped to get rid of polio by 2000.

“These dates seem increasingly arbitrary and gloss over all the previous dates we’ve heard before,” she said.