Volcanic eruptions can reduce river flows by up to 10%—study 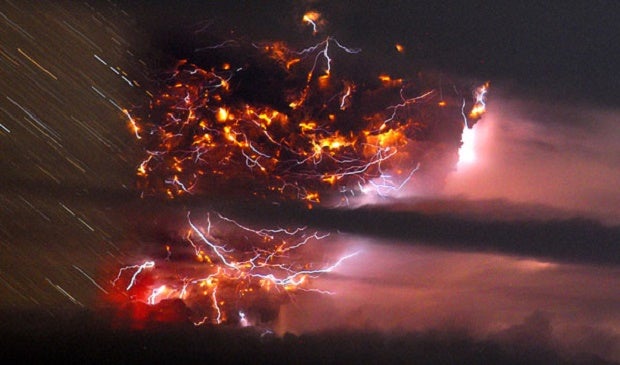 Volcanic lightning is seen over the Puyehue volcano, over 500 miles south of Santiago, Chile, Sunday June 5. Authorities have evacuated about 600 people in the nearby area. The volcano was calm on Sunday, one day after raining down ash and forcing thousands to flee, although the cloud of soot it had belched out still darkened skies as far away as Argentina. AP Photo

PARIS, France—Volcanic eruptions can reduce water flows in big rivers, reports a study released Monday that cautions against schemes to fight global warming by injecting reflective particles into the sky.

The volume of water in rivers including the Amazon, Nile and Congo dropped by up to 10 percent throughout the 20th century after mountains blew their tops—and millions of tons of debris into the atmosphere, the lead researcher told AFP.

In the first study of its kind, University of Edinburgh scientists Carley Iles and Gabriele Hegerl compared annual water flow in 50 rivers around the world with the timing of major volcanic eruptions, notably Agug in 1963, El Chichon in 1982 and Pinatubo in 1991.

For some rivers, records went back into the 19th century, making it possible to take into account earlier eruptions too.

They discovered that a year or two after these volcanoes belched massive amounts of debris into the upper atmosphere—creating a partial sunscreen—the flows of tropical rivers decreased.

“It was known that volcanic eruptions affect global rainfall,” Iles explained by email.

“But it was previously unclear to what extent this translated into changes in river flow,” she added.

The study does not specify by how much water volume was reduced, but a rough calculation for the Nile and the Amazon—the world’s largest river by discharge—showed a drop of about 10 percent, she told AFP.

That may be enough to have an impact on agriculture and the wellbeing of humans that depend on those rivers, especially if highly populated regions, she suggested.

Globally, the net impact of big eruptions has been a drop in water flows. But in some regions—southern South America and southwestern United States—the amount of water coursing through rivers actually increased.

The study, published in Nature Geoscience, is also a caution against so-called geo-engineering schemes proposed as a solution for cooling down an overheating planet.

“As well as affecting river flow and rainfall, volcanic eruptions have a cooling effect on climate,” Iles explained.

“All of these impacts come about because volcanoes inject particles—sulfate aerosols—high up into the atmosphere, and these spread out and reflect sunlight back out into space.”

The eruption of Pinatubo, for example, discharged some 17 million tonnes of sulphur dioxide 40 kilometres (25 miles) into the lower stratosphere, where it lingered for several years, eventually dissipating.

Advocates of “radiation management” have proposed injecting massive quantities of similar particles—with cannons, planes or giant tubes—high into the sky to achieve the same effect.

“Our findings suggest that these kinds of geo-engineering schemes are likely to have side effects on river flow, so caution is advised,” Iles said.