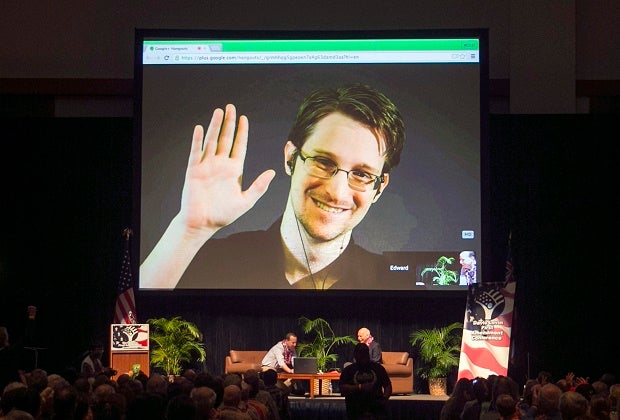 “They want to own your phone instead of you,” the whistleblower said in an interview with the BBC’s Panorama program, referring to Britain’s Government Communications Headquarters (GCHQ) agency.

Snowden claimed that GCHQ used a series of interception tools called “Smurf Suite,” after the blue cartoon characters, The Smurfs.

“Nosey Smurf” enabled spies to switch on a smartphone’s microphone even if the phone was off, he claimed.

Other programs used by GCHQ were nicknamed “Tracker Smurf” and “Dreamy Smurf,” which allows phones to be switched on and off remotely, Snowden said.

He said the text message sent by GCHQ to gain access to the phone would not be noticed by its owner.

“When it arrives at your phone it’s hidden from you. It doesn’t display. You paid for it but whoever controls the software owns the phone,” he added.

The BBC said the government had declined to comment in line with usual policy on intelligence matters.

Snowden, who has been charged by the US with espionage and theft of government property after leaking documents to the media about digital espionage, has been living in exile in Russia since June 2013.

The British government is planning legislation that would give more powers to intelligence agencies to monitor online activity to investigate crime.

TOPICS: audio, device, Edward Snowden, Hack, message, photos, recordings, smartphones, spies, technology, Text, UK
Read Next
Volcanic eruptions can reduce river flows by up to 10%—study
EDITORS' PICK
Alex Eala wins Grand Slam on Independence Day: ‘I hope I made my contribution to the country’
Palace: Duterte to announce new quarantine classifications; ‘normal’ GCQ likely in NCR Plus
Ahead of ONE: Full Blast II, Mongkolpetch warns Elias Mahmoudi: ‘Watch out for my fists’
Liza Soberano’s ‘Trese’ stint defended by voice actor Inka Magnaye
Synology NAS: A photo storage and multimedia server for your home
3 die, 110 recover from COVID-19 in Aurora province
MOST READ
‘Hindi pwedeng take 2,’ Sotto tells presidential, VP aspirants
Lacson: Kind-hearted Leni ‘in it to win’ presidency in 2022, but…
Not even found in Tiktik: Another bad word snuck into DepEd materials
Sotto, Villanueva react to LGBTIQ+ promise not to give them votes
Don't miss out on the latest news and information.