RizaRiza lives on a small island and commutes to school by boat. When she was writing her final thesis, a typhoon hit and made travel impossible. With Facebook and Free Basics, Riza was able to communicate with her classmates during the storm and finish her thesis. #connecttheworld

ILOILO CITY—Riza Mae Tachado had no inkling that using a free Internet app would make her famous.

On Tuesday, she woke up on Mararison island at Culasi town in Antique province, got online and found that Mark Zuckerberg, Facebook founder and CEO, had posted a video on how the Facebook app Internet.org had helped her in her schooling.

“I’m having goose bumps. I still cannot believe it,” Tachado told the Inquirer in a telephone interview on Tuesday.

Tachado, 24, or Mai-Mai to friends, said she did not expect the video to be posted by Zuckerberg on his Facebook page. “I’m just an islander. It feels like graduating again,” she said.

The 71-second video shows how Tachado used the Internet.org app in working on her thesis and eventually earning a diploma on computer science. Internet.org allows free browsing of popular websites.

“This is an amazing story about Riza—a young woman on a small island where the only job for women was collecting seashells, yet she used Internet.org to earn a degree in computer science,” Zuckerberg said in his post (https://www.facebook.com/zuck/videos/10102421074005081/?__mref=message_bubble).

“Being connected means having opportunity. We’re going to connect the whole world so one day everyone can achieve their full human potential—just like Riza,” he said.

A mother of a 3-year-old girl, Tachado stopped schooling for three years due to financial problems before she decided to continue her studies in 2013 at the University of Antique in Tibiao town.

On the video, Tachado narrated that she was living on an island were the main means of livelihood for women was gathering shells.

“But I wanted more for myself,” she said in Filipino with English subtitles.

On the video, she also said she used the Internet.org app to communicate with her thesis group mates when she was stranded on the island for several weeks due to a storm.

She said in the interview that she used the app to access Wikipedia, Facebook.com and Ask.com to chat with her group mates on work on their thesis on the automated water billing system of Culasi.

Graduating from college last April was a significant step for her in aspiring for better opportunities. “I’m proud to be the first in my family to earn a computer science degree,” she said on the video.

A former resident of Barangay Jalandoni in the town proper, Tachado has been staying in Mararison since 2013 together with her husband Romnick and daughter Shecainah.

She is a homemaker while her husband earns a living through fishing.

Mararison, which has about 700 residents, is one of three islands of Culasi town, about 90 kilometers north of the capital town of San Jose.

The island was among those worst-hit by Supertyphoon “Yolanda” (international name: Haiyan) on Nov. 8, 2013.

But in recent months, the island has drawn a growing number of tourists because of its white sand beach, pristine diving sites and rich marine resources.

In May, staff members of Internet.org contacted her on the possible filming of a video on her use of the application. “I thought it was a prank call. But I was surprised when they actually arrived here,” she said. 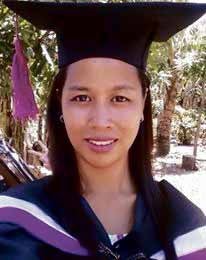 The filming took about four days in June. The team said it would send her a link to the video once it was posted.

Tachado told the Inquirer friends and residents of Mararison had been teasing her since the video was taken in June and when it was posted online on Tuesday.

“They tell me that I’m already a celebrity and they want to ask for my autograph,” she said, laughing.

Renee Gertjejansen Briscoe, one of those who commented on Zuckerberg’s post, said: “What an amazing woman … . Mark Zuckerberg you should hire her!”

Zuckerberg, one of the world’s richest businessman, replied: “That’s a good idea!”