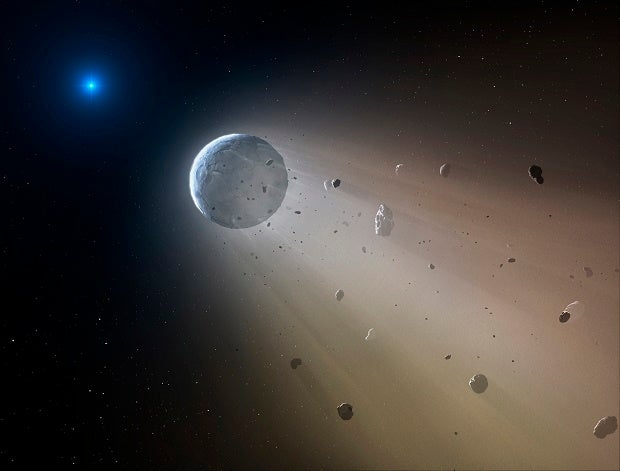 CAPE CANAVERAL, Fla., United States—A white dwarf star in the Constellation Virgo turns out to be a “death star” worthy of “Star Wars.”

Astronomers announced Wednesday that they have discovered a rocky object coming apart in a death spiral around this distant star. They used NASA’s exoplanet-hunting Kepler spacecraft to make the discovery, then followed up with ground observations.

“This is something no human has seen before,” said Andrew Vanderburg of the Harvard-Smithsonian Center for Astrophysics in Cambridge, Massachusetts, the lead author.

“We’re watching a solar system get destroyed,” he said in a statement.

The data show the object in an orbit 520,000 miles (837,000 kilometers) from the white dwarf. That’s the approximate distance from the Earth to the moon, and back. Vanderburg and his team also found several additional chunks of orbiting material.

Scientists believe the original object may have been a planet whose orbit became unstable, and was kicked inward. The pieces already are being vaporized by the white dwarf, located about 570 light-years from Earth, and will eventually be ripped apart.

The findings are being published this week in the journal Nature.