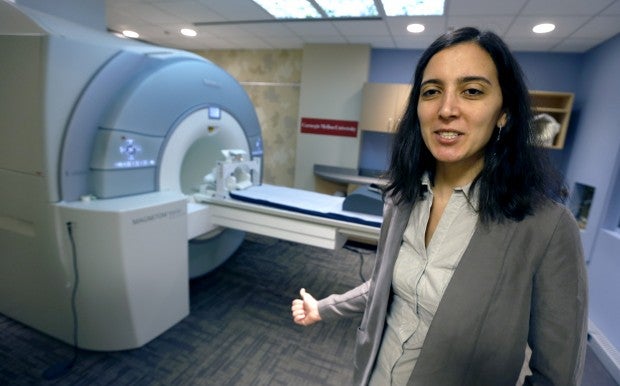 Leila Wehbe, a Ph.D. student at Carnegie Mellon University in Pittsburgh, talks about an experiment that used brain scans made in this brain-scanning MRI machine on campus, Wednesday, Nov. 26, 2014. Volunteers where scanned as each word of a chapter of “Harry Potter and the Sorcerer’s Stone” was flashed for half a second onto a screen inside the machine. Images showing combinations of data and graphics were collected. AP Photo

PARIS, France—Prolonged exposure to even low doses of radiation increases the risk of cancer, according to a new study of workers in the nuclear sector in Britain, France and the United States.

The results, published Wednesday in the British Medical Journal, provides “direct evidence about cancer risks after protracted exposures to low-dose ionizing radiation,” said the International Agency for Research on Cancer (IARC), the cancer agency of the World Health Organization, which coordinated the study.

“No matter whether people are exposed to protracted low doses or to high and acute doses, the observed association between dose and solid cancer risk is similar per unit of radiation dose,” he added.

The International Nuclear Workers Study (INWORKS), a collaboration between international partners, evaluated the exposures of more than 300,000 nuclear workers in Britain, France and the United States between 1943 and 2005.

The results showed that the risk of death from solid cancers was “modest” but that one in every hundred cancer deaths could be attributed to workplace radiation exposure.

“The findings are important not only for the protection of workers in the nuclear industry but also for medical staff and the general population,” since the level of doses received by nuclear workers is comparable with that received by patients repeatedly exposed to CT scans or other radiology procedures, said IARC researcher Dr Isabelle Thierry-Chef.

“This stresses the importance of striking a balance between the risks and the benefits of such medical imaging procedures,” she added.

The average age of workers in the study was 58 years.