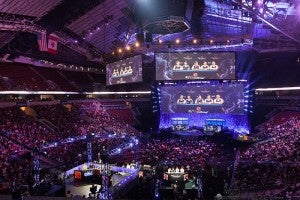 Esports have surged onto the mainstream media in recent years, gaining extensive presence across a variety of platforms including online, print and even television coverage. But how exactly did the games rise to such worldwide appeal and in such astronomical fashion?

Esports were once just the bastion for groups of dedicated gamers; however, this view now seems to be changing. Big players in the sports broadcasting world, such as ESPN, are now flirting with esports coverage.

The multinational television network has experimented with DOTA and League of Legends in the past, which led some to heavily criticise the network for giving coverage to something many sports jocks didn’t deem worthy.

However, on merit alone, the esports industry is absolutely booming. Big name tournaments frequently offer immense cash prizes for esports teams and competitors. To put this into perspective, The International 2015, the flagship DOTA 2 tournament, commanded a prize pool of roughly $18.5 million.

Esports have dedicated channels in the form of Twitch and YouTube Gaming. True, these aren’t broadcast through cable or satellite, instead being streamed over the internet, but these are modern solutions to a modern phenomenon.

Streaming is the perfect solution to allow gamers to interact with each other on a massive scale, taking advantage of equipment all players will already have access to.

Recently, there has even been a surge in esports betting apps and websites. One of the market leaders, Unikrn, has recently invested in an esports analysis firm to provide it with match data and statistics, bringing egaming in line with the data-driven approach traditional betting sites use to generate their odds.

This will allow the firm to offer the most competitive betting odds available, allowing esports fans to wager on games and matches much the same as football or boxing fans would. It should come as no surprise that many of the major bookmakers now list odds for the major matches — and it is proving a hit with punters!

Access to this additional data will allow Unikrn to offer more intuitive and exciting betting markets – something that all serious betters look for from their betting provider.

Esports is set to continue growing. With healthy prize funds, a dedicated group of fans and increasing coverage in national and international media, it’s hard to see the industry slowing down.

It is becoming more and more viable for esports stars and events to be featured more regularly on television, and sooner or later, even network and national news. For a large portion of people, esports teams and gamers are the rock stars, athletes and idols of this generation — and with enough people interested in it, it was only ever going to be a matter of time before the big players in the media had to start taking them seriously.

It’s looking increasingly likely that within the next five years, esports will very much enter the mainstream consciousness, perhaps changing the way we view videogames forever.