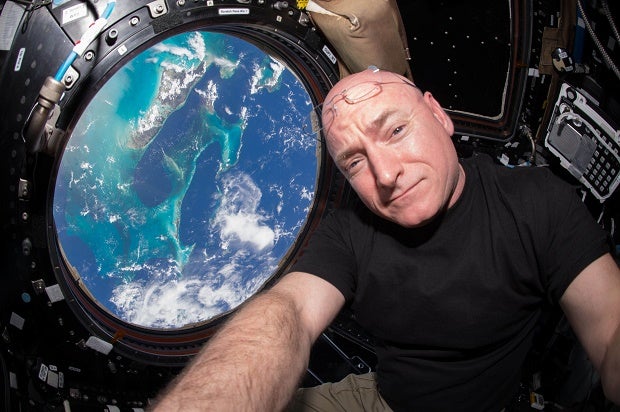 This July 12, 2015 photo made available by NASA, astronaut Scott Kelly poses for a selfie photo in the “Cupola” of the International Space Station. On Friday, Oct. 16, 2015, Kelly broke the U.S. record for the most time spent in space Friday—383 days. NASA via AP

MIAMI, United States—NASA astronaut Scott Kelly will Thursday set a new record for the longest single stretch of time spent in space by an American, with 216 consecutive days at the International Space Station.

Kelly is more than midway through an entire year at the ISS, as part of an experiment to study the effects of long-term spaceflight on the body and mind.

Russian cosmonaut Mikhail Kornienko is also spending a year at the orbiting outpost for the study.

Kelly’s twin brother, Mark, is taking part on Earth to help scientists compare any genetic changes they see in Scott while in space.

Astronauts typically spend no longer than five to six months at a time in space.

“Breaking such a record for time in space is important because every additional day helps us better understand how long-duration spaceflight affects bodies and minds, which is critical to advancing NASA’s journey to Mars,” the US space agency said in a statement.

NASA hopes to send people to the Red Planet by the 2030s. But it remains unknown if explorers could survive the long term journey, which might last three years.

Concerns for the health of pioneers in deep space include exposure to potentially cancer-causing levels of radiation, and the psychological difficulties of living in an enclosed space with no access to nature, family, or friends.

The record for longest single spaceflight was previously held by American astronaut Michael Lopez-Alegria, who spent 215 days in space as commander of the ISS in 2006.

Since Kelly has already flown in space several times before, he broke another record earlier in October for the most cumulative days spent in space by an American.

But Kelly is a long way from the record of the longest time spent in space by a human being.

That honor goes to Russian Gennady Padalka, who set a 10-year-old record for the number of cumulative days in space June 28 when he reached 804 days.

Padalka flew to space with Kornienko and Kelly in March, and returned to Earth after six months.

“When he returned to Earth September 11, Padalka had spent 879 days living and working in space,” NASA said.

Kelly is scheduled to return to Earth on March 3, 2016, by which time he will have logged 522 total days living in space during four missions.

The ISS is about to mark its 15th year of continuous human presence in low-Earth orbit.

The research outpost has been staffed by a rotating cast of more than 200 people over the years.